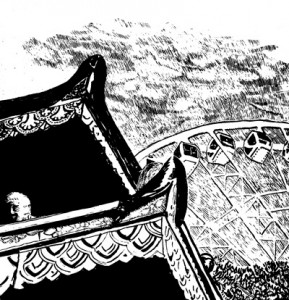 You run along the river bank, the Hero behind you nearly taking out a cyclist or two and having to stop to help them, then take photos and sign autographs. How could you outwit the Dark Legion when you can’t even get the Hero to focus?

“In here!” You pull the Hero inside the Pagoda, the shadowy air a cool relief after your sprint. It is musty and quiet inside and, most importantly, free of birds. “So, they’ve taken over the birds, too?”

“It’s always the first thing they do. They infiltrate the natural birds that live in an area with their own robo-birds which operate as their spies and soldiers, but it’s impossible to tell which bird is which. You could think you’re watching a delicate, long limbed ibis wading through the stream and then next thing you know you’re taking on a razor beaked assassin with the power of flight. It’s best policy to just steer clear of all of them.” He is suddenly pensive. “That’s the mistake my old Apprentice made.”

You shudder at the thought of death by beak. “So, how are we going to stop them? What tools do we have?”

“First, we must visit the oracles of South Bank, who have hopefully not been infiltrated by the Dark Legion. They will give us clues as to how to proceed into Legion territory, where we must find and capture their leader.”

“But how will we win against a Legion of evil and thousands of robo-birds?” you ask. The Hero is big, sure, but you’re feeling outnumbered.

“You doubt the power of the happiness of South Bank,” comes a mysterious voice from behind you, “the reason people come here is not just because what can be seen or touched, but how it makes them feel.”

You turn to see that the wooden statue of Avalokiteshvara has come to life, stepping out of her glass case gracefully. In your surprise at the statue’s sudden animation, you don’t know whether you should bow or offer a handshake, but Avalokiteshvara just smiles at you gently and takes both yours and the Hero’s hands, walking you to the entrance of the Pagoda.

“I, for example, represent compassion; I serve to remind people to look beyond themselves and to empathise with all others around them.” You stand at the door, looking out at the tourists taking photos and strolling down the path. “Here, in such a place of tranquillity people may come to bond more closely with family and friends, to see a theatre show or artwork that connects to something deep within them, and communicates about the wider human experience. This is a true treasure, one that can be felt with the heart and spirit, not a material experience that will be short lived. The Dark Legion cannot easily attack a person or space so fortified with peace.”

“Is that why they haven’t come here yet?” you ask.

“But they have not succeeded!” roars one of the dragons standing guard outside.

“You see,” says the Hero, high-fiving the dragon, “we have a whole army of our own on our side.”

“So, what would you suggest we do to solve our Quest and defeat the Dark Legion?” you ask the statue.

“I think you should stop all this fuss and have a picnic, it is such beautiful weather!” squeaks a little voice above you. You look up to see one of the tiny, carved monkeys clapping his hands at the thought of such delights.

“You should fight, fight to save what you believe in!” roars one of the dragon guards.

“No,” cries one of the scantily clad women surrounding the walls, “you should find somebody to luurve, and then spread that love and joy all around the world!” The women all giggle and blush, turning away from you and hiding their faces demurely behind their hands.

You look back to Avalokiteshvara. “Any serious suggestions?”

She closes her eyes and seems to be thinking. “You have two choices. You may bravely venture further ahead into the Dark Legion’s territory, where bad deeds are taking place, or you may head to the ABC building and gather further information from the oracle stationed there.”

“Thank you for your advice, Avalokiteshvara,” you say. You turn to the Hero, “What do you think?”

He sighs, “Ultimately, I will heed your advice. To be honest, I’ve hardly caught a word that Ava-lok, Ava-kot, Ava has said. Heading into enemy territory is dangerous, but I am brave!, Though not fond of the idea of a slow, pecking death…”

You’ve seen The Birds, and you’re not a fan of the montages of avian demise running through your head either.

One (Streets Beach): Decide to take the Arbour walk further up the river to the sandy Streets Beach to the boardwalk that crosses between two pools, where you enter into enemy territory and can observe the havoc wreaked on the beach?

Two (ABC Building): Head back the way you came, up the river and then inland, to the cultural forecourt where you can hide in plain sight and get lost in the crowds of tourists in front of the ABC building?