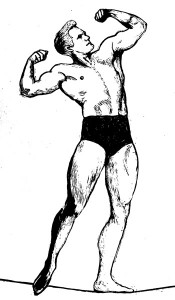 You hear the commotion before you see it, the swell of noise as an excited crowd forms near the intersection at the end of Reddacliff Place. Traffic passing across Victoria Bridge seems to halt en masse and a fanfare of trumpets erupts suddenly. The sound seems to be blaring from all around you though you can’t quite pinpoint the source. Has the city’s emergency warning system been hijacked by some kind of royalist terrorism cell? Are they going to make you all drink copious amounts of tea?

With a certain amount of bravery you cross the square, quickly swallowed up by the ever-growing crowd.

You spot one family hoisting their children up into the branches of one of the young trees planted in the square to get a better view of what is coming, the tree’s immature trunk swaying to and fro under their weight, the parents doing their best to stabilise things from the ground. What, or perhaps rather who, on earth could be causing all this commotion?

The trumpeting stops and a booming, game-show host voice announces to the crowd, “Ladies and gentlemen, boys and girls, we give you…your HERO!”

At the words the crowd erupts and across the bridge comes a throne, carried by four burly men on each side, with another man sitting regally atop. He is the biggest, blondest man you’ve ever seen, his chin the size of your knee, one of his biceps large enough to pass the height restriction on a theme park ride.

Without waiting for his carriage to be set down, the man leaps from the chair and up atop the silver ball you are standing next to. He performs feats of acrobatics and strength, balancing first on one foot, then on one arm, then leaning backwards, attached only by a pinky toe, to eat an apple carried by a passing lady. The lady swoons, the crowd roars and the Hero smiles, you swear his teeth even glint as they catch the light.

“Look, look!” One of the children perched in the tree above you swings alarmingly close to your face, holding on to her branch by the knees, “I’m a hero too!” she cries, imitating the Hero’s feats of strength.

“No, I’m a Hero,” her older brother shouts, balancing at the very top of the tree, one foot stuck in the air.

“The Hero is picking his new Apprentice today, from the crowd!” The youngest brother explains while dangling clumsily by one arm. “I hope it’s me!”

You turn away from the giddy children and back to “the Hero” in time to see the man of the moment bench-pressing a mid-sized youngster with one hand and shaking the hand of the Lord Mayor with the other. You’re ready to leave this place of lunacy and resume your day when you hear a sudden crunch, then a snap and before you know it a whooshing, child-sized lump has fallen on your head. Scrambling to keep your balance, you reach up, pull the youngest boy off you and lower him to the ground. You’re sure this just earned your chiropractor a month’s worth of adjustments.

As you rub your crunched neck you feel the prickling sensation of all eyes on you. You look up to see the Hero beaming at you expectantly and it is clear he’s asked you a question.

“Thinking only of others!” the Hero booms to the crowd at large, “As only a true Hero would!”

The crowd go wild again, only this time you can’t tell if it’s for the Hero or for you.

“What is your name, I asked you,” the Hero repeats.

You tell him your name and before you know it, the Hero lifts you out of the crowd to join him on the silver ball, handily cracking your neck back into place as he yanks you up.

“Well folks, I have found my Apprentice! Today we have seen courage in action, we have witnessed humility and grace as my new Apprentice has willingly put their life and body on the line to save another. Yes, it has been a very good day! And now we must head to battle with the ever-present Dark Legion – those of evil persuasion who have been infiltrating our city over the past years.

You’ve seen their handiwork; the rising floodwaters, the wild storms, the messy graffiti and constant littering. They will stop at nothing until they have ruined our beautiful city, that is unless my Apprentice and I stop them first!”

The crowd, as you have come to expect, goes wild.

“I thank you for your support and bid you all farewell!” The Hero jumps off the silver ball, dragging you with him, and the two of you land with a thump on the ground.

You look up at the Hero who is smiling his expectant, glinting smile. Do you:

One (Herb Garden Southgate): Decide to go along with this crazy lark and become the Hero’s “Apprentice”? You and the Hero walk across Victoria Bridge on the Western pedestrian path, ambling towards the QPAC side of the river. You take the ramp down to river level, and walk toward South Bank and the community garden growing along the river bank edge.

Two (Elephant Statue): Tell him thanks but no thanks, choosing to leave this place of insanity and continue your day in peace? You hastily shake the Hero’s hand and cross the Victoria Bridge on the Western side, you take the ramp down to river level, and scurrying away from all the commotion along the riverbank, head towards the green banks of the GOMA café and an unlikely positioned elephant.