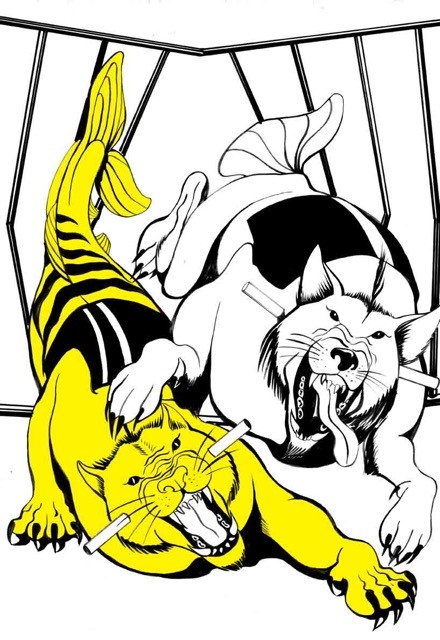 Ignoring the strange voice, you follow Abramelin along the path, passing by the fenced in rock pools. You catch movement from the corner of your eye and see the little statues begin to creak and stretch, shaking off droplets of water like wet dogs. Abramelin seems not to notice, eyes glued to the device in his hand, muttering about thaumic resonance and unprecedented fluctuations.

You walk closer to the fence, peering through the bars at the creatures. Flakes of paint and stone are peeling off as they flex new muscles, blood surging into pinched white flesh, bringing life and colour. One of the beasts, a half-fish, half-dog creature pads towards you, its head tilted in curiosity. You crouch down and reach through the bars as it draws close. The creature roars and snaps at you with razor-edged shark teeth. You whip your hand back hurriedly and sprawl on the ground.

Abramelin looks up and notices the creatures which take halting, unsure steps and shake flecks of peeling paint from fresh, glistening hides.

“Most unusual,” he says. “Something is weakening the walls of reality. Spirits are slipping through and manifesting through objects. I wonder what’s causing it.”

As if in answer, a huge geyser shoots into the air from the Broadwater and the sea surges in towards shore as the water is displaced. Something massive, black and shiny breaks the surface like a new island. From beneath the sea, a deep call resonates out, muffled by tonnes of water but loud enough to rattle your teeth.

The fountains dotted around the Rockpools stutter and halt for a moment, then spray sticky black ichor in ropey streams up into the air. The living statue creatures raise their voices in chorus, hooting and cackling with weird, almost human cries. The sound chills your blood.

“This can’t be!” screams Abramelin over the cacophony.

The creatures burst through the gaps in the fence in a flood, tumbling over one another in their haste to reach you.

The Playground Web: Sprint away from the little monsters and try to formulate a plan? Keep running! They’re right on your heels.  There’s a playground just up ahead, maybe you could climb up something and hold them off.

The Pier: Dash to the Pier to get a better look at the thing rising from the sea? Clearly it’s the root of everything and the sooner you fix that, the sooner you can stop the homunculi behind you. Vault over anything behind you, duck and weave until you can get back to the pier. Run to the end for the best view of what’s happening in the Broadwater.