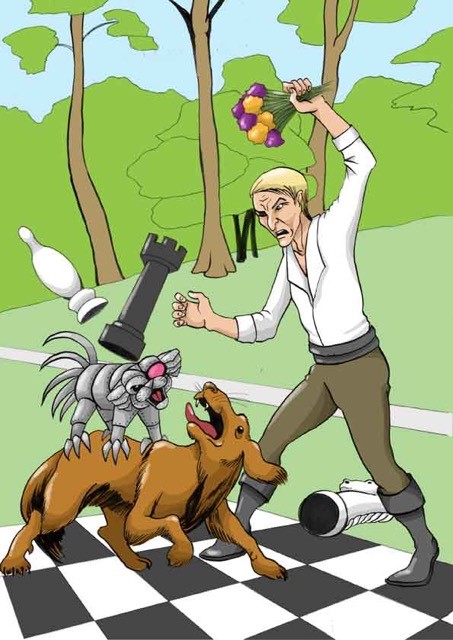 Before Fergus has a chance to drool on your parade, you hear the gruff drawl of a pirate then see a clean-shaven, waist-coated, blonde-haired man in knee high boots. Avast, could this be him? You’re a little disappointed; where are the dreadlocks, the bandanas, the cutlasses? Draped across his shoulders is an off-white Pekinese with a tiny pink eye-patch.

Seriously?! When did parrots go out of fashion? you wonder.

You hear an unearthly humming and swear her uncovered eye is flashing. Fergus doesn’t care about her monocular appearance however; it’s love at first sight. He leaps at the pirate, eager to impress his new belle.

The Peke yaps demonically, and catapulting from his shoulders, lands atop Fergus. You gawk slack-jawed at her glowing backside – it’s metallic!

She clings on with remarkable dexterity for something without opposable thumbs as Pirate Phil advances and with a swoop of his arm, raises his weapon above Fergus ready to strike.  It comes down hard, exploding in a cloud of purple petals. The missing bouquet! So, this scurvy, quite well-dressed sea scum really did steal the rings!

Fergus recovers first and snatches the bouquet in his maw, shaking it hard enough to give himself concussion. Stella grapples for it then together they race off towards the marina. The Pirates of the Caribbean theme song suddenly erupts from Phil’s pants. He fumbles for his mobile.

“Yes, yes… hold onto your rhinestones! What? The bouquet? No, it’s right here—“

He sees the small pool of pulverized petals at his feet. “Argh, those scurvy curs! Damn, we’re running out of time. I’m on the way!”

He storms off in the direction of the Marine Village leaving you questioning Barry’s theme choice for this wedding, if Phil is in fact part of the wedding. That would explain his connection to Luigi but why would he take the bouquet? You’re confused about what you overheard; does he have the rings or are they are still in the bouquet? If you are ever going to can Barry’s plans, you have to get them back.

Pier E Harbour-Side: Decide the pirate has the rings so slink after Phil, tailing him through the northern gates to the harbour front, then across the Village Green towards the Promenade and Marina until you reach Pier E.

Pier B Marina: Decide they’re still in the bouquet? If you can get those rings, you can still stop this wedding; maybe even claim a reward. You sprint after the dogs, ducking and weaving along the path between the main resort and the grey coloured block of accommodation, past the Woolshed and down into the Marine Village car park. They careen through it, swing left into Masthead Way then pause briefly at the permanent dogs’ water-bowl stationed by the seat outside the IGA store on the corner. By the time you reach it, they’ve darted across the road into The Docks Precinct. It looks like Stella is heading for the marina, to Pier B. You follow them there.

Phil’s ringtone shivers your timbers. You fancy yourself as an adventurer but need the right sounds. Click on Phil’s ringtone link to unleash the spirit of Caribbean pirates. At the next marina location, take a photo of yourself in front of a vessel of your choice. Don’t forget your pirate scowl! Upload your swarthy snap to Facebook/Twitter using #StoryCity