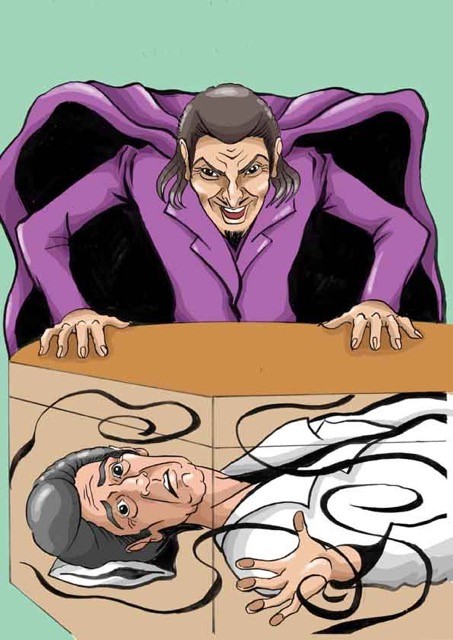 A surreal mix of classy boutiques and delicious smells surrounds you. Elegantly dressed women pull stupidly dressed ankle-high dogs along on diamanté-encrusted leads. No wonder Barry chose this place to marry in; it’s full of facades just like his stage show!

Walking under bunting strung with rotund white lights that remind you of overweight glow-worms, you pull up outside the Village Theatre. Above the entrance is a sign of a cinematographer operating one of those old-style movie cameras, the kind they used to use in ancient times to film silent movies. You’d love to be able to sit out the rest of the day here, watching movies but then remember what the concierge told you about this place – it’s a theatre that houses magic shows now, special interest magic shows, not for the fainted hearted. Besides, Delilah’s waiting for you and you need to confirm your suspicions about her feelings. The sooner you can convince her that you don’t blame her for wanting out of the wedding, the better.

The Theatre entrance gapes like the maw of a benevolent beast. You’re taking in the huge display advertising the latest illusion show when you spot Delilah’s blue beach kaftan billowing up the stairs into the building. How did she get here so quickly? Maybe she came to the same conclusion you did and was heading to the pharmacy herself. How could she mistake this place for the pharmacy though… there’s not a cod liver oil tablet in sight.

Sprawled about on the grassed area in front of the theatre are several Bengali tigers. Thank goodness, they’re only statues, probably part of the magic act; they’re ginormous! A flicker of movement snaps your head sideways. The amber eyes of a tigress, curled around her cub, drill into your soul as her whiskers tremble in the breeze. A scream chutes out of the theatre doors, saturating you in dread. You pick your way around the tigers and dash up the stairs after Delilah.
The instant you step inside you know you’ve made a mistake. It’s pitch black. The smell of sulphur bites at the back of your nose. After your eyes adjust to the dimness, you spy a box the length of a coffin blocking your way. Its sides are bubbled glass. You see the distorted face of Barry through them, screaming something you can’t hear because the lid is sealed. On top of the lid seethes a sea of black velvet.

“Welcome,” the velvet-cloaked figure booms, “to the home of Mefil, the Magnificent. Be prepared to be astounded!”

Wait what –you’re not prepared for anything. You search for a way out and swivel back to the doors. Delilah is there barring your escape, shrouded in a royal purple cape that clashes horribly with her kaftan. You’re no expert, but don’t think inciting crimes of fashion is the best use of her getting-ready-to-wed time.

The next instant, the room illuminates with a sick green glow, blinding you for a second. When the smoke clears, you see the coffin with Barry has disappeared.

“Elvis has left the building, at last,” whispers Delilah.

There’s an uncomfortable tingling in your forearms. You look down and choke back a scream. Your arms are missing but you don’t feel any pain because in their place are a huge pair of white feathered wings. You open your mouth to scream again and emit a loud – HONK! Mefil’s deftly aimed spell is contorting your lungs and filling your head with a pea-sized lust for wheat. Wings or no wings, you have to get out of here.

You charge for the doors, slapping Delilah aside, expecting another Mefil magic bolt to strike before you make it. Miraculously, you do and burst through the entrance and down the stairs. You can’t be seen like this. You take a few steps down the road, flapping your arms wildly but flying is the impossible dream; you remain anchored to earth. You give up and scramble on foot out of the Marine Village, towards the car park, your eyes set on the Manor Circle roundabout intersecting with Masthead Way.