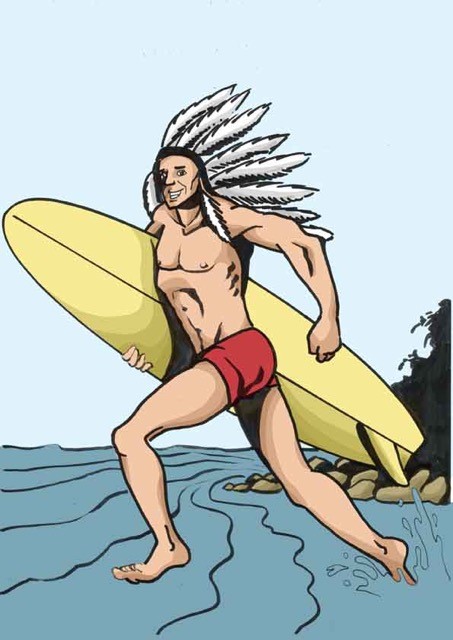 You run along the path around Greenmount Point overlooking the ocean and gobbling like a bush turkey which, as far as you are concerned, is precisely what you are. You’re fixated on the elaborate headdress of feathers bobbing atop Billy Rak’s head as he jogs around the Point, surfboard under his arm. Bill’s a popular local legend, a wiry, jovial, Paul Hogan look-alike who hires out surfboards and spray-tans tourists by day and plays drums in a variety of bands by night. The quintessential Coolangatta showman.

He reaches the lookout which will one day bare his name, the Billy Rak Lookout, and he pauses to observe the waves peeling down the Point. As you get close he takes off again and nimbly trots down a wooden staircase to the water’s edge.

You give chase, dodging other walkers, surfers with boards, young mothers pushing prams, elderly couples arm in arm, that remind you of your grandparents. Except you are a bush turkey so how on earth could you have human grandparents? You make your way down the stairs gaining on Billy Rak and his Indian headdress, but he quickly trots through the shore break, launches his board nimbly over the back of a small wave and begins paddling out into the lineup.

You give chase, unable to resist the allure of that magnificent arrangement of feathers on his head bobbing so invitingly. But the moment you hit the chilling embrace of the water, the spell is broken. You realise you’re not a bush turkey after all, but rather a soggy human chasing a man in a headdress as he paddles out to sea.

You look around and realise you’ve attracted the curious stares of passersby, including a young couple who look down from Billy Rak’s Lookout. Your jaw drops open when you realise the woman is your grandmother and that the handsome young man in uniform beside her is definitely not your grandfather.

You and Grandma lock eyes for a moment, before the military man hurries her on a little too forcefully for your liking.

Billy Rak has paused from his smooth progress through the breakers to observe your soggy, disheveled state of confusion. Billy’s always had a soft spot for any character down on their luck, a kind of informal town counsellor for lost souls.

“You okay?” he asks. “Need someone to yarn with?” Billy seems to read your pleading expression. “Waves don’t look too flash. Wind’s picking up and the tide’s getting a bit high anyway.”

You could hug him. It’s an attractive offer and you could do with a caring shoulder right now. Where to start? But Grandma’s heading off with Soldier Boy towards Rainbow Bay on a romantic stroll that could obliterate your very being.

The Table of Knowledge:  Go and spill your guts to Billy Rak? He is a wise local legend who knows the lay of the land a lot better than you do, and you’re going to need some allies. You’ve heard of his reputation as the local “Agony Aunt” and figure that’s just what you need right now. Billy leads you around Greenmount Headland towards Rainbow Bay and the “Table of Knowledge”, the first picnic table you come to.