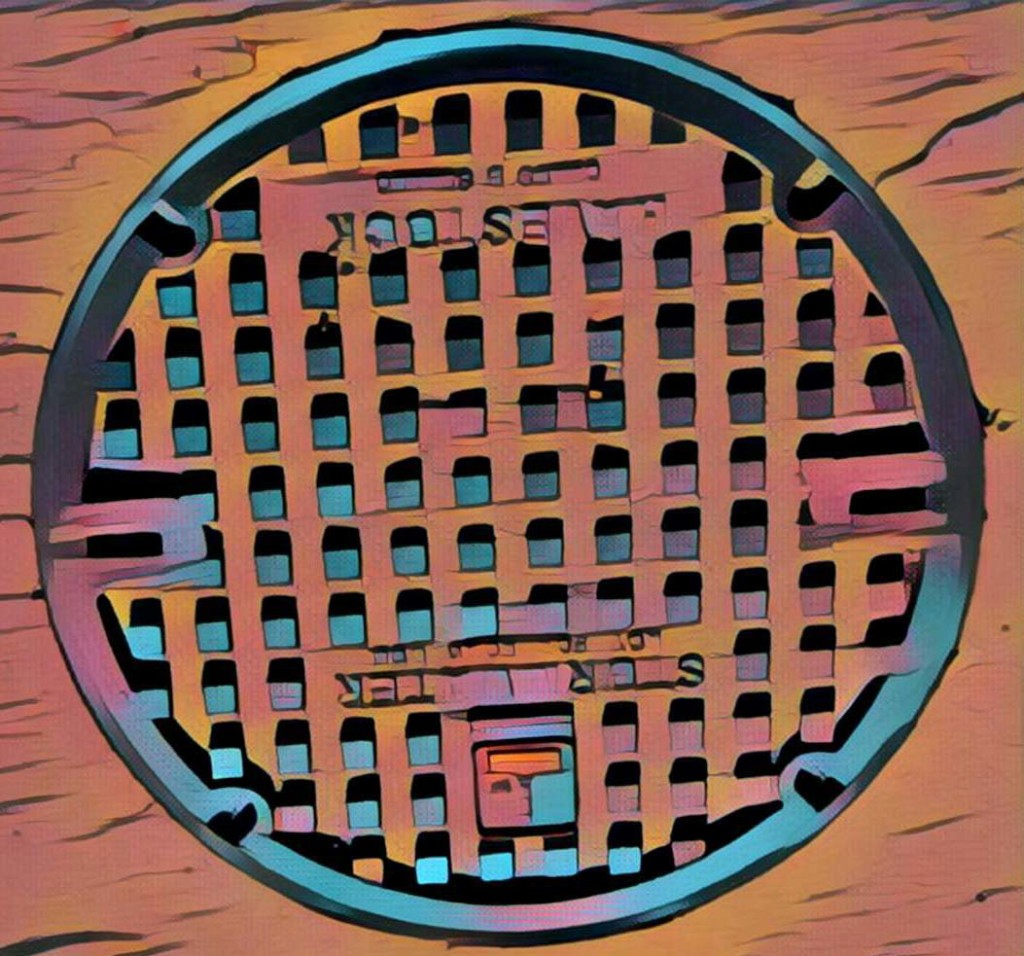 Oh. Yes it’s gettin’ dark and there are people lurkin’ about. It’s possible some ‘ave the instinctive feeling it would be better to be away from crowds right now. Some will certainly have discovered that public transport is sporadic, if it’s running at all.

No, I didn’t hear the man between the waterfalls shouting that the approaching storm is a judgement on humans. The device, remember, is my sole link to your dimension. No it’s not a judgement though he is correct to be concerned. Bits of the 15th dimension super storm that opened the rift to this dimension have come through and it’s proving to be a catalyst for catastrophic weather events in this region.  ‘owever they are in the formative stages and can still be averted if you’re successful in your quest.

Yeah, I did say the virus had been sent through the rift. But I can’t tell you who sent it at this nexus.  Save to say that, it’s not a who that sent it.

Don’t concern yourself with that.

Stop!  Do not let anyone attach themselves to you.  Be watchful for people who appear confused, and whose hands twitch. Avoid physical contact for although they can’t affect you, they can hold you and summon those affected who have transitioned to the third stage, at which point they can infect your kind.

You can’t find an omicron where your senses have led you? It may be buried beneath the earth.

My kind? I have no kind. I’m immortal. At least, I’ve the potential to be immortal.

Nah, it does not surprise me that you think it ought not to matter to an immortal what happens here. Too many of your kind lack the imagination that will be needed if they are ever to evolve beyond the limitations of your kind.

Yeah, now that you mention it, imagination is a quality that’s high among the traits of the chosen ones. It’s one of the things that differentiates you from your friend Kumiko.  She has an imagination, which though quite powerful in its own way, requires certain predictable stimulus. For instance, in The Hoard game, she always envisions herself as a warrior with splendid and powerful weapons with which she scores a very high number of kills and always survives. You on the other hand, have given your avatar the ability to read minds and sense emotions. Your imagination is stimulated by many more things and functions in far reaching, un-predictable ways.

I mean that you get less kills than Kumiko. But this quest is not a killing game. It’s a complex hunt, requiring you to evade mortal danger, not to engage and eradicate it. Your ability to think creatively and your more complex responses make you a perfect chosen one because in its final stages, the virus causes the affected to behave in a way that is dangerously similar to the pattern exhibited by Kumiko in the Hoard.

No I won’t tell you why you were chosen.  Suffice it to say that the universe needed you, and I am part of the way it produced you.

This nexus is too unstable now, if you haven’t found the omicron by now you’ll have to make it up by collecting one at every other nexus. You shouldn’t miss more than one.

You got two possibilities for the next nexus. You can go to the Police Museum or Triple M Radio Station. The omicron at the Police Museum is strong, but there are affected within the parameter of the nexus. The omicron at the Radio Station is very strong but it’s a tiny nexus, and Kumiko is in the building with her journalist friends aggressively recruiting warriors to help hunt down aliens. They’re naive in their assumptions. If you’re not careful you may be dragooned into their number and not be allowed to continue your quest.

Another thing to note is that a large group of the affected are making their way along the Pacific Highway. If you chose the radio station they’ll move towards you immediately. You’ll have to find the omicron and leave as soon as possible, or they’ll overrun you. If you choose the police museum, you’ll be able to evade them by getting ahead of them.

There are groups around you ‘eading in the direction of both nexus. Travel with them for cover but don’t allow them to encompass you. At the same time make sure none focus their fear or suspicions on you. Speak to people casually. Make eye contact.

Nexus 5B: The Police Museum? There is a strong omicron here, and it’s away from the approaching horde, but there is affected in the perimeter of the nexus. If this is your chosen path move to the café behind you and take the escalators to the train station. Pass through the station to Roma Street, and cross at the lights to reach the museum on the opposite side.

Nexus 5C: The Triple M Radio Station? Kumiko is hiding out there and the omicron is strong, but the horde may over run you if you’re not quick enough. If this is your chosen path move to the café behind you and take the escalators to the train station. Pass through the station to Roma Street. Cross the road and head down Makerston Street until you reach North Quay Road. Turn right and follow the path until you reach the station.