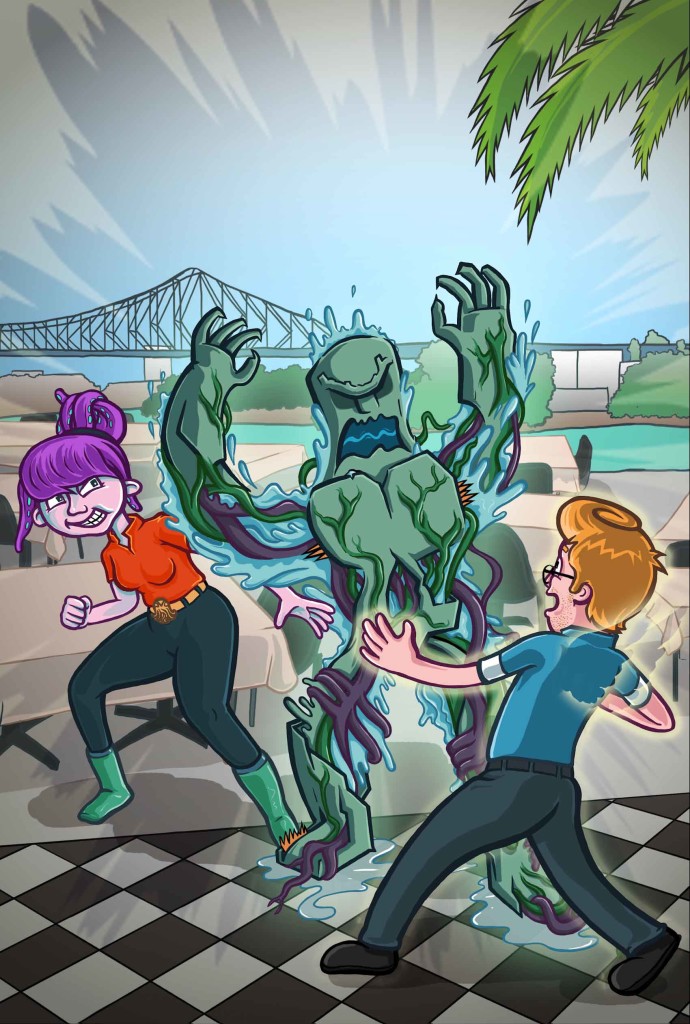 You knew one day, after you borrowed your cousin’s boyfriend’s ute to move house, that you’d have to pay him back. “A favour for a favour,” he’d said. That’s how you’ve ended up handing out canapés at a function for his catering company at Customs House in Brisbane. You take a moment to catch your breath outside the wide staircase, gazing up at the historic dome and feeling pretty small. Then you go in, across the checkerboard floor, and get to work.

At first you don’t know, or really care, what the function is and who all these people in penguin suits and gowns are. But then you recognise the ex-police-commissioner from his photo in the newspaper. From that news story that hit the papers then disappeared real suddenly; the one about Queensland Police’s rumoured EHU. Enhanced Human Unit. Real-life superheroes.

You’d thought it intriguing at the time and now you’re serving tiny bread squares with chorizo paste on them to some really interesting-looking people. Does that chick over there have a slight green tinge to her skin? That guy: he must be at least seven feet tall with hands like Christmas hams. And that middle-aged lady in the blue sequined gown batting her eyelashes at the ex-commissioner… are your eyes playing tricks, or can you see feathers poking out from under the hem of her sleeve?

You move about the crowd, listening in on their conversations. Snatches come to you as you circulate, smiling and offering up platters of Persian meatballs.

“—forget the science; I saw it with my own eyes—”

Frustratingly, none of these morsels resolve themselves into a full narrative, and of course that’s the point. They see you coming and they clam up, talk about how much they love the prawn kebabs or ask if there’s anything gluten-free. They just act just like regular people; not enhanced people and if you weren’t so obsessed with government conspiracies, aliens, and (let’s be honest) Marvel comics, you wouldn’t have even noticed.

The event winds down. They leave in taxis and limos. You try to sneak a few photos on your phone, but the light is low and the flash would attract attention. As the last few stragglers hang about the champagne table, you flick through your photos in despair. Not a single good one. Even the green chick just looks tanned in the picture. Nobody is ever going to believe you.

“You need to grow some balls!”

“And you need to grow a heart!”

You peer out the door to see where these heated voices are coming from. Just outside, on a long verandah with chequer-board tiles, a dark-haired woman and a fair-haired man are having a argument.

Neither of them look remarkable. She could pass as your favourite history teacher: pretty, bookish, but with her best years behind her; he looks more like a history student, with a round stubbled face and circular glasses.

“It’s your fault we’re stuck on desk duty!” she shouts.

“My fault? It wasn’t me who went all Cthulhu on the deputy premier! You’re just lucky I could heal him in time. You really need to think before you act sometimes.”

She’s leaning into him, fingers shoved into his breastbone. He’s conciliatory—but not afraid—saying things like, “I get you must feel that way” and “we did what we could and can’t blame ourselves”. You come to understand that these two Enhanced Humans aren’t doing so well; partners relegated to desk duties for some past misdemeanour. You gather from their conversation that their names are Krissy and Jack. Everyone else has left, but they don’t seem to have noticed.

You are about to head back inside, when there’s a scream. Not from the arguing pair, but from over the balcony, where another group of people—it looks like a twenty-first party—are having drinks by the river. Something has come out of the water, and you stare and stare but you still can’t make sense of it. Human shape. What looks like ligaments and veins on the outside, but green-black, the colour of seaweed. It’s mottled grey like a dead fish and it has climbed out of the river, stumbling into the crowd, overturning tables and lashing out with clawed hands.

In a flash, Krissy and Jack are running towards it and you’re running after them, opening your camera app.

“It’s a water revenant!” Krissy shouts at Jack. “I’m going to smash it to a pulp.”

“No, wait,” he said. “Let me try telepathy… why must you always think with your fists?”

They stop to argue. The water revenant has leapt on to a table and is gnashing its teeth at a young man with a chambray shirt and a top-knot.

“Do something, you idiots!” you shout at Krissy and Jack. “There’s a monster at Customs House! Just agree on something!”

They turn. Krissy raises an eyebrow. Jack says, “You decide then. What do we do? Who would you follow?”

Water Wall: Try to find out what it wants and choose Jack? You don’t like to see things suffering, and you note that even though the creature is turning tables over, it hasn’t actually hurt anyone yet. So you say, “Jack’s right. If we can solve this without violence, we should try.”

Just as these words leave your mouth, the water revenant jumps down off the table and begins to run.

Turn right out of Customs House and turn right again down the walkway towards the river. Take another right onto the City Reach Boardwalk. Continue along the river’s edge until you see the steps leading up to the water wall fountain on your right, behind the Jade Buddha bar.

War Memorial: Do you decide the creature is a danger and choose to follow Krissy? You look around at the terrified faces at the twenty-first party and say, “Catch it, by whatever means necessary.”

“Yes!” Krissy shouts, barrelling down the stairs towards it. The chase is on!

Turn left out of Customs House and follow Queen Street until it meets Eagle Street. Cross the road to the War Memorial.