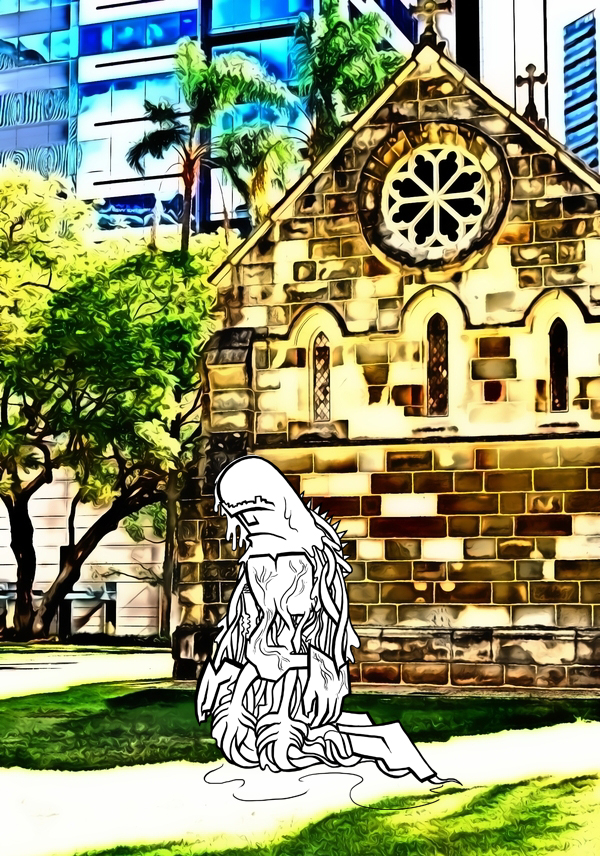 You’re panting, having just dashed madly to the cathedral. Two hugely buff guys outside a gym had shrieked like little girls at a slumber party and run when they saw the creature. You powered past, ignoring the pedestrians clinging to each other.

“Sorry, sorry,” you had call to them. “It’ll be okay, those two are superheroes.”

Your words didn’t appear to comfort anyone.

The creature stopped in the gardens as the bells on St Stephen’s Cathedral began to peel, head cocked as though listening. Krissy put on a burst of speed and was about to crash-tackle it when Jack called, “Stop! No!”

She pulled up comically fast, nearly overbalancing on her heels.

And Jack was there, in front of the creature. Whatever revulsion he had for it was hidden behind a soft smile. “The bells? Do they remind you of something?” He went to take the creature’s arm but it growled, and would only allow you to lead it to the stone steps. The bells ring on.

The creature moves its mouth as though to form a word, but stops as though he can’t remember how to do so. But you think you see it make the shape of a “P” so you offer, “Penelope? Is that what you’re trying to say?”

He looks at you—really looks at you—and you can see the man he once was, the sailor who left his wife one day and never returned to her. Until now.

Jack nods. “Will you let me take your hand?” he asks.

The creature looks at his own hands, doesn’t seem to notice that they are grown over with barnacle and weed, and offers one to Jack.

Jack takes it. The warmth and serenity that comes off Jack in waves makes your whole body relax.

The creature tries to speak again, and this time a broken-glass word, guttural and breathy, emerges from his mouth. “Baby.”

Tears prick your eyes. The creature has come back from the sea, back from the dead, only to discover his wife, his child, are centuries in their graves. A breeze sweeps across the square, carrying leaves in front of it. They skitter along the ground, swirl a moment and then are still. Traffic and movement continues all around the square, but the four of you are in some kind of bubble that Jack has created, where nothing of the urban chaos and confusion can penetrate.

“I’m so sorry,” Jack says. “Two hundred years have passed. They are gone. They are all gone.”

“Gone?” the creature says, and humanity flushes his face so you can see beyond the weed and scale, and right through to the man underneath. A light has come on in his eyes. He slumps forward, head in his hands and says, decisively and clearly, “Gone.”

“Maybe not all,” you say suddenly. “Maybe his child had a child… and so on. He may have descendants.”

The creature lifts its head, and tries to speak, but it comes out as bubbles and grating noises. The occasional word rings clear as a bell among it—Penelope, baby, gone.

“Why can’t he speak?” Krissy asks.

“Don’t look at me,” Krissy shoots back.

“Do you think he’d remember himself? Know what was going on if he had a human body around him?” you ask, hoping nobody thinks you’re volunteering.

“I think so. But I think he already knows his mission has been fruitless. He’s returned for nothing. We should probably take him back to water. Let him ride out on the great tide to wherever his wife and child might be now.”

“The tides in the Brisbane River aren’t that great,” Krissy says.

“I think he means death,” you say.

“I can’t decide,” Jack says, turning to you. “I’m too soft of heart, and she’s too hard of heart. What do you think we should do? If we let him take human form to find his descendants, he might be able to find some peace… but there are no guarantees. It might just be upsetting and painful. Or take him back to the water and just end his suffering?”

Your mind whirls. You try to imagine how the creature feels and you think maybe he has suffered enough. He might not have descendants, or he might wander fruitlessly for a week, baffled by the strange new world he’s in and feeling all the horrors of loss and aloneness with a human heart. Was his simplicity in revenant form protecting him from the worst? It’s time to be the voice of reason, of the grey between rather than the black and white of these heroes.

Masonic Lodge: Let him take human form? “There might be old letters, old photos, things that can help him reconcile his past. We should try.”

“He can’t wander forever,” Jack says, in a practical tone. “I can help him into another body, but it will only last a week.”

“I can think of a place where we might find a body,” Jack says.

Turn right onto Elizabeth St and then left onto Creek. Continue up and turn right on Ann Street. You stop ahead at the Masonic Lodge on your right.

Fountain at Anzac Square: Do you decide to return him to the water? “Let him go,” you say. “He’s accepted they’re gone. He won’t return.”

“We need to get him to water,” Jack says. “Return his spirit to the substance that took his life, somewhere close and symbolic.”

“The fountain in Anzac Square,” you say. You stand, and the creature follows. He trips, his desiccated feet refusing to carry him any further. Suppressing a shudder, you allow him to loop his arm across your shoulder; his touch is cool, nowhere near as slimy as you expected. With Jack and Krissy trailing behind, you lead the walk with the revenant towards ANZAC square.

Turn right onto Elizabeth St and then left onto Creek. Continue up and turn left onto Adelaide Street. Continue until you see ANZAC square on your right; cross it to find the fountains.