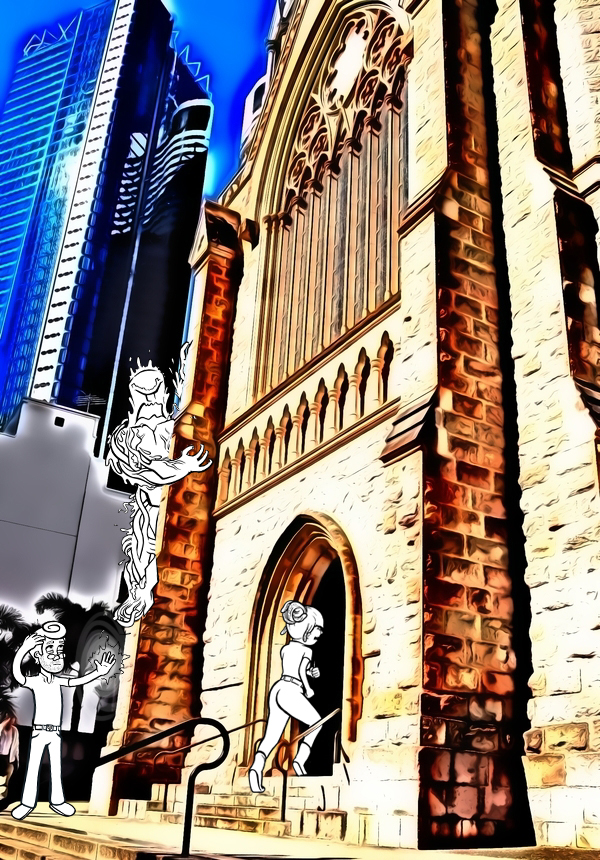 Your legs are aching from running after the revenant. He was always ahead of you, but as you emerge onto Elizabeth Street and the cathedral came into view, the bells ringing again, the revenant faltered, almost falling down in front of the great wooden doors. Now he is staring up at the towering spires.

The doors open. A cheering crowd, falling rice and a bride in white emerge from within. The revenant smiles, his face twisting into an unnatural shape. He only manages to take two steps, however, before the bride lets out a howling screech. Chaos. People run in every direction, the bride trips over the meringue-like layers of her skirts.

“Help her!” you shout to Krissy as the revenant approaches the fallen bride. In three short leaps, Krissy is upon the monster, wrenching him off of the woman. They roll away, the revenant’s overgrown nails scrabbling to find purchase on the concrete ground. It only takes him a moment to get back to his feet, but that’s long enough for the bride to flee, the terrified groom clutching her arm.

Krissy’s body twists on the ground as she launches a kick at the revenant. The creature dodges the blow, leaping towards the church face. He perches on the roof, a grotesque gargoyle observing you and the enhanced humans below.

“Begone, monster!” a voice cries from the cathedral. The priest’s words echo around the cavernous stone room within. “No demon such as you may enter the house of God! Our ancient wards protect us.”

“Oh, stop talking rubbish, I haven’t renewed the wards in decades,” Jack says to the priest. “If he wants to enter the church, he will.”

And enter it he does. Through the roof.

The noise in unbelievable, stone and glass crashing and cracking as it falls to the old flagstone floor. You hear a scream from inside — the old lady who runs the gift shop fleeing the revenant.

“We have to get rid of it,” growls Krissy. “This ends now.” She pounds up the steps to the doorway, now blocked by a heap of rubble. Krissy crouches, her arms raised in a strange martial arts pose. She sucks in a deep breath and — you can’t quite believe your eyes — a mass of tentacles erupt from beneath her clothing. Purplish coils of flesh shoot out around her, grabbing hold of pieces of stone.

“Yeah.” Jack laughs. “Did we not mention that she’s an alien?”

“Yeah,” you answer. “I think you skipped that part.”

Krissy, like Cthulhu from the deep, clears the debris away from the entrance to the cathedral, her tentacles sucking back beneath her clothes. She turns to you, grinning triumphantly.

“Uh, Krissy my dear,” Jack says, smothering a smile. “You missed a spot.” She raises an eyebrow, her eyes straining to the left to see the tiny tendril still wriggling from her ear hole. It recedes.

A banshee shriek tumbles out from the cathedral. Krissy lurches into action, entering the building. You dash in after her, but Jack hangs back.

“I can’t… Well, we’re not on good terms you see. I’ll just wait out here,” he calls to you. You have no idea what he’s talking about but there’s no time to lose.

Krissy is turning in a slow circle in the middle of the cathedral, eyes searching every wall and archway. “He’s in here somewhere.” Her voice echoes around the roof, high above.

A blur of green passes you in a rush of damp air. It strikes Krissy, sending her skidding across the ornate floor. The revenant speeds towards the door, but stops when it enters the shaft of light, pouring in through the hole in the roof. A sound rasps from his throat… laughter? Like glass grating on ice he chuckles, and strides confidently out of the church.

“Oh, you think you’ve won, do you?” Jack’s voice. Through the doorway, you see the revenant freeze, caught in a bubble of glowing golden light. You leave after it, your eyes struggling to focus on the orb. Jack stands there, arms spread wide. He’s enveloped in a cascade of beautiful golden smoke. It curls and coils about him, forming a thousand beautiful patterns. He smiles at you, his eyes shining.

“To crush it? Or to burn it?” His words sounds musical, almost like a computer voice. “Krissy is right. There can be no redemption for this beast.”

“Crushing it sounds easiest,” you say.

“There’s no guarantee that we can find a force great enough. Cleansing fire is a difficult ritual though, and a dangerous one for a human like you, but it is certain to destroy the monster entirely,” Jack replies.

Eternal Flame: Decide to risk yourself to burn the revenant? “We can’t risk it coming back, and it seems… fitting. For the water monster to die by fire.” The revenant’s eyes strain; although he’s still immobilised by whatever magic Jack is using, his gaze darts about as you discuss his imminent destruction.

“Very well. We need a powerful flame though, I am too weak to conjure a flame strong enough. We need something that’s worshipped, something with history and meaning.”

“The eternal flame,” you say as Krissy staggers out of the church behind you.

Turn right onto Elizabeth St and the left onto Creek. Continue up and turn left onto Ann Street. Continue on until you find the ANZAC memorial flame on your right.

Bridge, Corner of Ann & Creek Street: Do you decide fire isn’t as fool proof as Jack might believe and choose to crush the revenant? “It’s a creature of water, it might be able to combat fire. Let’s crush it, it’s safer for everyone.”

“Very well. We need a lot of force though, a car or truck won’t be enough. It needs to be heavy, and fast.”

“The trains,” you say as Krissy staggers out of the church. “Near Central Station.”

Turn right onto Elizabeth St and the left onto Creek. Continue up Creek Street until you cross Ann Street onto the bridge over the railways.