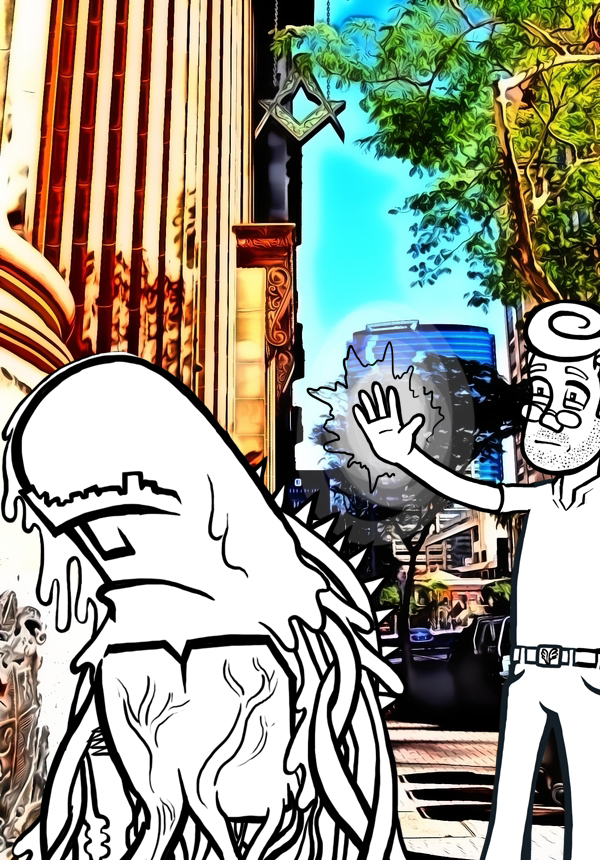 “Ta-da!” Krissy says with a glint in her eye. She has led you all down to the Masonic Lodge on Ann Street, and now stands happily under the Masonic symbol. “Men’s-only club,” she explains. “I’ll just grab the first one that comes out.”

“I’ll prepare the revenant,” Jack says, and he puts a hand on each of the creature’s temples. “You nab the host body.”

“How exactly are you going to do this? Is transplanting souls an everyday occurrence for you?” you ask Jack with a laugh.

He nods. “Pretty much, yeah. Soul transfer made up the bulk of my work before I joined the EHU. But I’m only a minor deity, I never even made Lieutenant.”

“You’re a deity?” you ask, astonished.

“Yeah, and she’s an alien,” Jack says, hitching his thumb towards Krissy. “That’s the real reason we don’t get on.”

“I’m not a fan of religion,” Krissy says.

“And I’m not a fan of off-worlders,” he replies. The revenant watches this exchange with puzzled eyes. He places a hand on Jack’s shoulder. Jack smiles at him, nodding. You stand back to watch. A silvery light emanates from Jack’s fingers and it starts to glow over the revenant’s temples, then his face and scalp, then on down his body. At the precise moment it hits the creature’s feet, a well-dressed, portly man with grey sideburns emerges from the building. Krissy wrestles him into her arms.

Jack turns, and he is holding the silvery, transparent shape of a man between his hands. He throws it, and behind him you see the water revenant collapses onto the ground and becomes a lump of seaweed.

But he doesn’t throw it at the Mason; he throws it at you.

“No!” you shout, but it’s too late. A cold fog enters your body, clouding your vision, making everything sound muffled and slow. You try to move your lips to say, ‘why?’ but can’t seem to control anything about your body.

“What are you doing?” Krissy says, releasing the Mason who hurries off.

“I’m sorry, it had to be you,” Jack says to you. “Somebody who knows what’s going on. If we put another soul in any random person’s body, they’d probably go mad.”

Again you try to speak, but now your thoughts are scrambled, bleeding off into crevices in your brain. Another mind is in you now, and it speaks instead. It says, “Thank you.”

You want to scream. Get him out, get him out. But your arms and legs feel clumsy and leaden and you—the little light that makes you who you are—is growing dimmer and dimmer.

“You have a week,” Krissy says to the revenant inside you.

“You’ll just evaporate. The host should survive, though may be feeling a little disoriented.”

The host? That’s all you are now? You push back against the revenant inside your head, but he will not dislodge.

“At least I have the chance to find out what happened to them,” he says, using your lips, your tongue. And he starts moving, using your feet, your knees. You resist, you resist hard, and he stumbles.

He tries to walk in you again. Your light is growing dimmer. He is growing stronger. What if Jack’s wrong? What if you never get yourself back? If he lied about this what else was he lying about?

He stumbles again, limbs turning spastic as you push back against him.

One leg falls over the other.

Directly into the path of an oncoming truck.