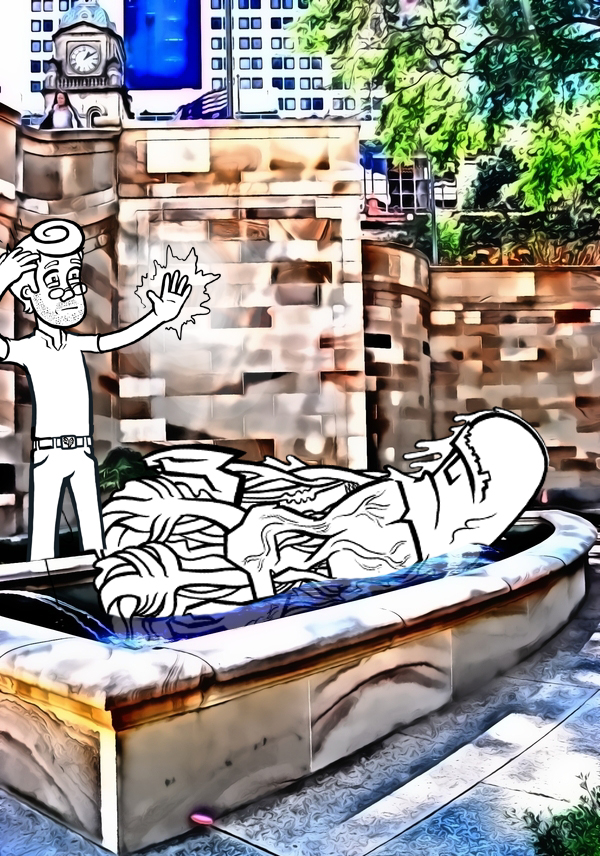 By the time you reach the square, the revenant is practically falling apart—almost as if his body knows what’s coming.

“Everyone finds the abyss of death in the end,” Jack murmurs.

Krissy sniffs. “Not on my planet we don’t.”

“Wait… you’re from another planet?”

“Yeah, and he’s an angel.” She points at Jack, almost accusingly. “That’s the real reason we don’t get on.”

“I can’t abide aliens,” Jack says with a nose-wrinkle of disgust. “You never know when they’re going to grow a tentacle.”

Krissy rolls her eyes, but a flicker of a smile plays across her lips. As you help the creature down the stairs, you notice it is already starting to lose its shape. As the spirit begins to flicker and fade within it, his limbs are elongating and growing floppy.

“Quick,” you say to Krissy, as the revenant’s watery arm starts to slip from your shoulder. “Help me carry him!”

Krissy swoops in and grasps the creature’s other arm. Together, you carry the revenant down the path towards the gently bubbling water of the fountains below the memorial flame. You almost laugh as you realise that, to the pedestrians giving you furtive glances, you must appear to be helping a friend who’s had a few too many.

“Hang in there,” Jack says to the revenant. “You’re almost home.” Clouds have moved in and rain spits down lightly, rippling serenely in the pool of water.

“In the water,” Jack says to you and, after you and Krissy drag the revenant in, he climbs in too. He is unravelling now, scales floating away, seaweed unribboning in the blue water, algae blooming around him. The brass lion’s head spits a constant stream of water and under its pressure the revenant is breaking up, turning back into matter from the sea.

Jack kneels. “Repeat after me. Go in peace, creature of the deep,” he says.

“Go in peace, creature of the deep,” you and Krissy chant in unison.

“The tide withdraws. Be tranquil upon it.” You repeat his words. Even Krissy seems somber as you stand and watch the revenant unravel. “From earth to sea as life to death, may you finally find peace in the embrace of the waves.” A shimmering hand rises out of the water, then sinks.

All that is left in the fountain is a pile of seaweed.