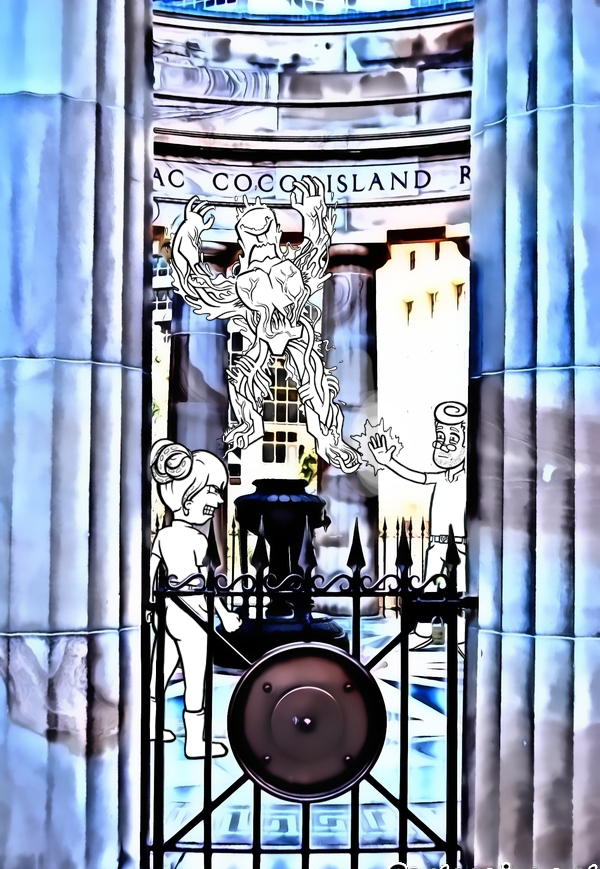 The imposing memorial stands before you. You’ve followed the revenant in its glowing bubble as it floated down the street, the ethereal container and Jack’s peaceful countenance contrasting starkly with the destruction you left behind at the cathedral. You and Krissy followed a few steps behind.

“So you’re—” you tried to ask, but Krissy cut you off.

“An alien. Yes. Jack provides me with a glamour: a spell to keep me looking human.”

Krissy laughed, a harsh bark. “Good grief no! Don’t be so ridiculous. Jack? An alien! Hah. No, he’s an angel.”

You didn’t answer. After all the other weirdness that’s happened since you started at Customs House, what makes angels so outlandish?

The gas-powered eternal flame seems to sputter and spark as it sees the revenant—or perhaps it’s Jack? With a wave of his hand, Jack unlocks the gate, allowing access to the fire itself. The four of you position yourselves around the fire: You stand to the north, Krissy west, Jack south and the revenant east.

“A human of this world, and one who has departed; a creature of the stars and an angel golden-hearted,” Jack chants. His words are melodious, but then they change, becoming foreign to your ear. “E’ toum emüss Tz’ark karaak Ei’öm,” The revenant lifts up, the golden bubble suspending him above the fire. Jack continues to talk, and Krissy joins in. She says the same unknown words as Jack, but from her lips they sound sudden and angry. Like Klingon. Jack is absorbed in his words, but Krissy catches your eye. She raises her eyebrows and taps her lips. You need to chant too. It takes a few rounds of the words but you pick them up.

“E’ toum emüss Tz’ark karaak Ei’öm,” you say. Beside Jack and Krissy’s powerful words, you feel like a child bumbling over a new phrase. But the words fill you with a sense of purpose, these are words of power.  The flame turns the same golden colour as the bubble, and the smoke around Jack becomes frantic, flicking to and fro.

Jack stops speaking for a moment, and then, in English, “What? The flames should be engulfing him!” You and Krissy continue chanting, and Jack rejoins you the second he finishes his sentence.

You look over the creature, down at the flames… surely there’s something you can do! Then, something catches your eye — a valve! You reach out and turn the tiny wheel, set into the base of the flame pedestal. The fire jumps, erupting like a volcano. Everything happens in slow motion. The fire engulfs the revenant, who lets out a soul-destroying screech. The flames expand, a ball of fire growing larger and larger, a wall of heat heading straight towards you. Purple tendrils snake towards you; Krissy’s tentacles wrapping around your body. You feel the heat through her protective shield and Krissy’s limbs pulsate.

Krissy withdraws. Jack smiles, the golden smoke around him gone. Something about him is… different. You can’t quite put your finger on what the change is, but a gleam is gone from his eye, his features seem less soft.

“At least it was worth it,” he says, sighing. “I guess I can even leave the city if I want, now.”

And the world about you is just as it was before all this began. The only signs that an undead beast had ever been set loose on Brisbane are the scorch marks around the extinguished flame, the complete ruin that used to be St. Stephen’s cathedral, and the hundreds of psychologically scarred civilians who had witnessed the events. Oh, and Krissy’s true body, a mass of tentacles ten metres across writhing and pulsating in the middle of Ann street now that Jack can’t maintain her glamour.