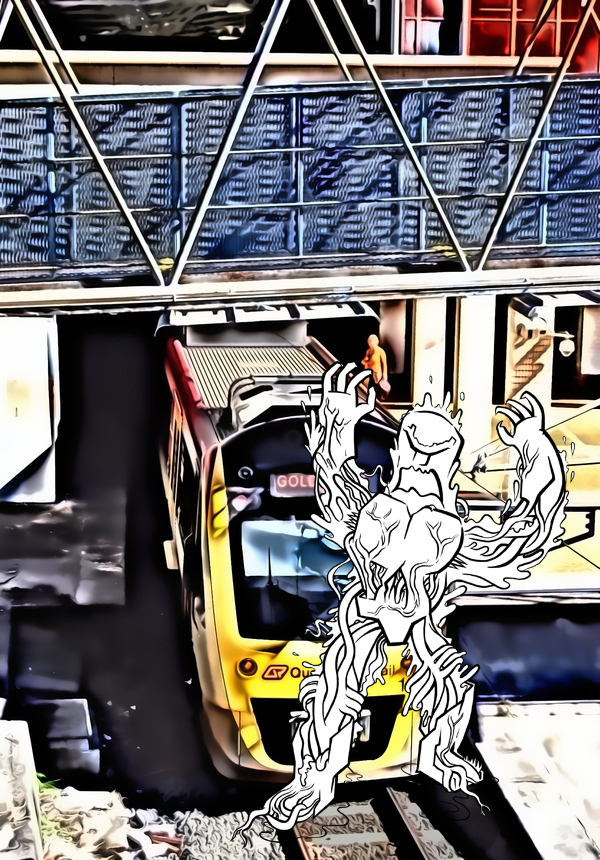 The four of you stand on the bridge, overlooking the dark tracks far below. You followed the revenant in its glowing bubble as it floated down the street, the ethereal container and Jack’s peaceful countenance contrasting starkly with the destruction you left behind at the cathedral.

“So you’re—” you tried to ask, but Krissy cut you off.

“An alien. Yes. I use Jack to maintain a glamour: a spell to keep me looking human.”

Krissy laughed, a harsh bark. “Good grief no! Don’t be so ridiculous. Jack? An alien! Hah. No, he’s an angel.”

You didn’t answer. After all the other weirdness that’s happened since you started at Customs House, what makes angels so outlandish?

The clatter from the passing carriages below rattles your teeth. You, Krissy, and Jack all stand at the edge of the bridge, peering over the railings. The revenant hovers just behind you.

Jack shrugs. “I guess so,” he says. “But it has to be just the right moment.” He gestures to the revenant, who wafts forwards, the bubble now suspended in mid-air above the tracks below. The monster looks at you, right at you. He’s pleading. You harden your heart, and turn towards Jack. You can hear a train coming.

And with a snap of Jack’s fingers, the bubble disappears. The revenant seems to hang for a moment, but he begins his plunge towards the tracks. He picks up speed, and there’s a sickening crack as his ancient bones collide with the steel tracks. His cold eyes stare up at you for just a moment. The quarter-past to Ferny Grove smashes into the revenant, the force practically disintegrating his body. The train’s wheels screech, sparks flying as the emergency brakes struggle to counteract the inertia.

The train disappears. You frown… where did that fog come from? No, not fog. Steam. Jets of white-hot steam burst from the remains of the revenant, racing up toward you, intent on stripping the flesh from your bones. You take a step back. The steam billows above you, a wall of translucent gas. Unlike Jack’s serene smoke, this is a menacing, storm-cloud formation. Shouts from below echo around the street, other trains screech to a halt and then you hear the sound of rattling bones. The revenant, lifted aloft by demonic clouds, clambers over the railing of the bridge. The creature has been stripped of flesh and clothing, leaving nothing more than a steaming skeleton. It looks at you, a dim green light shining from within its fractured skull. It has no face, but the way its head tilts you could swear it was smiling, a sinister grin.

A shard of bone, a fractured femur, comes sailing out of the steam. Almost peaceful, the flash of white passes by you as you leap out of its path and…

Krissy falls to her knees, the fractured bone sticking out of her chest like a stray arrow. Then another, and another, one catches your face, slicing open your cheek. Within moments Krissy falls backwards onto the pavement, the bones of the revenant protruding from her body like gravestones.

The steam dissipates. The revenant is gone and you look up at Jack. His eyes are bloodshot but dry and the golden smoke around him trembles, falling to the ground, as he surveys Krissy’s lifeless body.

Jack turns away, his eyes going heavenwards. “At last, I’m free of her. I can go home.”

Sirens swell in the distance. Jack gives you a smile. “Sorry,” he says.