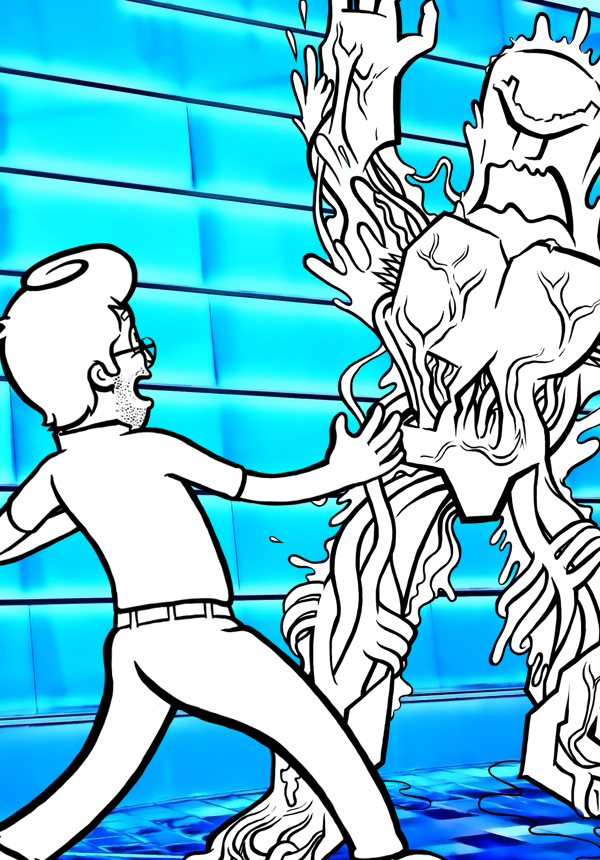 You pull up at the water wall at Riparian Plaza. The revenant has stopped, standing as if hypnotised, its strange splayed fingers pressed against the glass behind the water. Something about the sad hunch of its shoulders makes your heart twinge.

Krissy is barreling towards it, and you reach out and grab her arm to stop her. Her arm muscles bulge in your palm. “Wait,” you say. “Let Jack do his thing.”

Jack approaches, but the creature jumps away from him, up onto the ledge, standing in the water.

“It oughta be,” says Krissy.

Jack reaches out his hand, still metres away from the creature, and closes his eyes. “It’s sad,” he says. “It’s… he’s lost something.” Jack tries to get even closer, but the creature jumps out of the fountain and bares its teeth, growling and brandishing claws, but his snarls sound like those of a trapped animal in pain. He slashes out at Jack, who ducks out of the way, copping a cut across his left cheek — or maybe it wasn’t as bad as you thought, since when Jack pulls his hand away there’s no mark at all.

The monster pushes past you, his slick gray skin brushing your fingers and —

“I saw things in those stormy days. I saw the masts bend so far under the wind that it seemed impossible they could stand again. The deck was awash in seawater.”

The voice fills your mind, and the revenant’s watery eyes meet yours.

“We were all on deck, men tied to one another and then to the masts so they couldn’t get swept overboard. The wind roared down on us, we couldn’t hear the captain as he shouted. Then one by one, the ropes began to snap. The sails shredded. A wave like a mountain rose before us and we rode up and up, and all of us knew we couldn’t come down alive. We were all washed overboard in one swift, terrible blow. I looked down, saw that my shoes had been sucked off my feet, and then… all was black.”

You suck in a breath, your lungs feeling wet and heavy. “I saw something,” you say, turning to Krissy and Jack. “This creature is… he used to be a man, but now he’s… he’s dead!”

“Exactly!” Krissy says. “You can’t reason with a dead man. Can we kill it?”

“So that’s what I could sense. Revenants come back for a reason, we can discover what he’s lost,” Jack says. “He’s still sentient and we can we help him!”

Anchor Outside Naldham House: Choose to help him? “We should help him, he’s desperate,” you say, unable to get the voice of the poor dead sailor out of your head.

Krissy grumbles, but falls in behind you as you and Jack hurry along after the creature. Walk past the water wall and onto Eagle Street. Turn left, and walk past the restaurants to Naldalm House at Waterfront Place.

Edison Lane & Creek Street: Do you choose to destroy him? “Krissy’s right,” you say, forcing your pity down with a gulp.  There is blood dripping from Jack’s chin (though no scratch, what’s with that?) and you don’t want to see what the creature is capable of if it gets loose in a crowd of frightened people. “We can’t just let something like that loose in Brisbane.”

“Exactly!” Krissy snarls, clenching her fists. She turns and sprints after the creature, her ropy legs carrying her faster than humanly possible. You and Jack run after her, feeling the sluggishness of your inferior muscles. Krissy and the creature have disappeared up the street, but it’s easy to follow them — the revenant has left a trail of water, seaweed and sludge. Walk past the water wall and cross Eagle Street. Turn right and follow Creek Street until you reach Edison Lane, on your left.