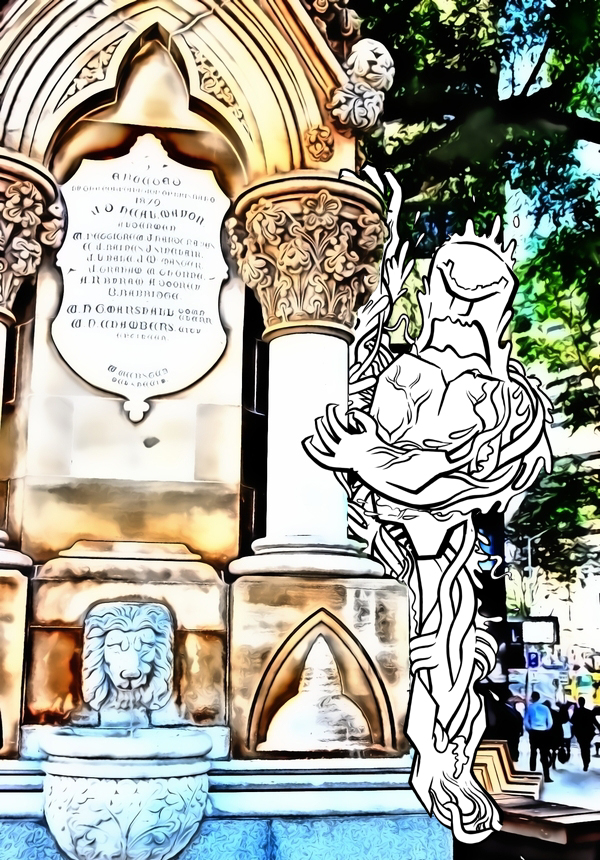 The thing climbs to the top of the memorial, making an unearthly screeching noise. Krissy climbs after it, teeth bared. It kicks her in the face and, with a cry, she falls backwards onto the ground. Krissy moans some kind of foreign words, eyes rolling in her head. Jack bends over her to see if she’s all right, and the creature launches itself down, aiming a kick at the back of Jack’s head. Without a moment to think it through, you dive in and grab the monster’s foot. It’s slimy and rough, like wet rocks. Both you and the water revenant hit the cement. The shock jars through your body. You’re going to be sore tomorrow.

Krissy takes the opportunity to scramble to her feet, trying to pin the revenant down while it’s on its back. Now that it isn’t moving so fast, you notice the creature is actually wearing a ragged shirt, trousers, and waistcoat: old-fashioned men’s clothes. Its bare feet, all webbed, seaweedy, and cut up by the ground, make it seem… human.

Krissy pummels its face but the creature fights back, his claws digging deeper and deeper into Krissy’s thighs. Her blood, a violent shade of purple, is pooling around them. The creature throws Krissy off and starts to run again. You are terrified of how strong it is, but also curious about where it has come from, and where it thinks it’s going. Krissy starts after it, growling.

“Don’t kill it, Krissy!” Jack shouts. “Tell her not to kill it. I have a strong sense we can help him if we can just get him to stand still!”

Krissy turns, spitting blood. “If it can hurt me like this, imagine what it can do to a regular person. It has to die.”

Anchor Outside Naldham House: Choose to help him? “We should help him, he’s desperate,” you say, unable to get out of your head the idea of how normal his clothes look.

Krissy grumbles, but falls in behind you as you and Jack hurry along after the creature. Cross Eagle Street and walk in the opposite direction to Customs House. Continue left along Eagle Street, past the restaurants and bars, until you reach Naldham House at Waterfront Place.

Edison Lane & Creek Street: Do you choose to destroy him? “Krissy’s right,” you say, forcing your pity down with a gulp. Her blood is congealing into a hard carapace, like armour, but you can’t imagine what the creature would be capable of if it got loose in a crowd of non-super people. “We can’t just let something like that loose in Brisbane.”

“Exactly!” Krissy snarls, clenching her fists. She turns and sprints after the creature, her ropy legs carrying her faster than humanly possible, even with her injuries. You and Jack run after her, feeling the sluggishness of your inferior muscles. Krissy and the creature have disappeared up the street, but it’s easy to follow them — the revenant has left a trail of water, seaweed and sludge. Walk down Queen Street, in the opposite direction to Customs House. Turn left down Creek Street, and then turn right into Edison Lane.