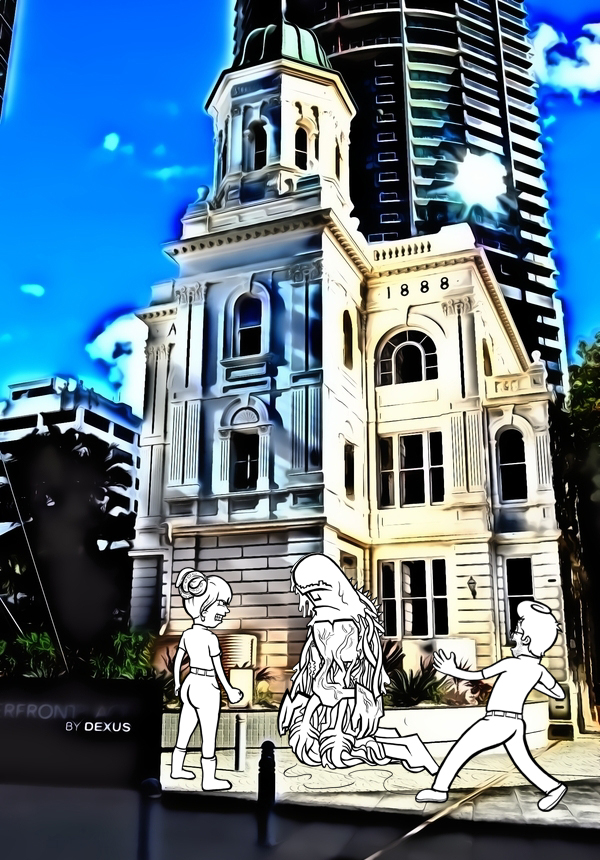 One moment it’s snarling and growling, the next it’s fallen into a stupor. Its gaze is fixed on the building, almost as if it’s hypnotised. Strangely calm. The creature touches the old walls, gnarled fingers tracing the edges. It turns towards you… is it inviting you to touch it too?

You touch the wall, keeping your fingers away from the creature’s. One of its ragged razor-like nails brushes against your hand and a convulsion of fear moves through you. You pull your hand back, but Jack whispers,

“Wait, I think he likes you.” You force yourself to turn back to the revenant, your gaze meeting his worm-eaten eyes. Jack murmurs under his breath; you can’t hear what he’s saying but a shudder passes through you. You raise a trembling hand back up to the wall and—

“I was a sailor,” he says. The voice of a man fills your mind, and the scene around you changes. The buildings fade away, but you see Naldham house in all its glory, as it once was. The masts of ships sway in the breeze over the river. The revenant presses a watery fingertip to your temple and words spill from your lips. They’re not your words and it’s not your voice. You sound like someone else, someone much older and tireder.

“We left from here and plied our way up the river and then out into Moreton Bay. Through the passage and across the Noosa bar, then out into the ocean. It was the year of our Lord eighteen-sixteen, and we were taking sugar to the French colonies in the Pacific. I… I had to leave my wife behind. Penelope. She was pregnant with our first child.”

A mirage of a plump, fair-haired woman appears, and beside you the creature slumps forward a little. For a moment it almost looks human. You are overcome by the desire to comfort him, but the thought of touching those seaweedy limbs makes you shudder.

“It was plain sailing for eight days, but then the conditions changed.” The images become so vivid that you could swear the black, rain-heavy clouds were really looming overhead. “The breeze grew stiffer, the sky filled with clouds and descended, swirling upon us. Three days and three nights we held through the storm. Nobody slept but in snatches, nobody ate but in quick gulps that stuck in their throats. It was the midst of summer but we all trembled from fear and cold and damp.” Your mind quietens, the images disperse. The water revenant slides down the wall, slumping into the ground, and reaches out towards you. Krissy tenses, ready to pounce. You’re certain that her lips are turning purple.

The creature looks at you and snarls softly in the back of his throat. Clearly, he doesn’t understand what is being said.

You steel yourself, pushing down all your fear and revulsion. “We need to learn about Penelope,” you say. The revenant tenses, his clawed hands curling into fists. A cough rasps your throat.

“Are you okay?” Jack asks. The revenant glares at him for a split second before it launches itself away from the wall. The street is filled with the screech of metal as the revenant pulls, with inhuman strength, a nearby lamppost from the ground. It throws the light at Krissy, and she falls to the ground, clumsily catching it to stop it from crushing her. The creature leaps atop it, toes curling around the pole like a bird of prey, teeth bared at Krissy.

With a roar, Krissy pushes the lamppost aside, sending the revenant sprawling across the pavement. It snarls, and backs away.

“It didn’t like you mentioning Penelope,” Jack says quietly, not taking his eyes from the revenant. “All he needs is to remember himself, there’s too much of the monster in him and he’s just reacting on instinct. If he can remember that he was once a human, with a wife, he might return peacefully to where he came from.”

“It’s been a hundred years,” Krissy counters heatedly. “Like he’s going to remember who he is now. In the meantime, he’s got a violent streak and sooner or later someone is going to get hurt.”

Jack rubs his temples, wincing. He’s starting to look as though he agrees with Krissy. Can you help the revenant be human again? Or is it time to accept he’s forever a monster?


Morton Bay Fig: Help him be human? “We need to get him away from all this urban noise,” you say impulsively. “Traffic and jackhammers… if he’s from the nineteenth century it will be overwhelming him.”

“Good luck,” Krissy scoffs. “We’re in the middle of the CBD.”

“There’s a big tree, over there. Let’s lead him to it. He might calm down enough so we can communicate with him.” You turn to the creature and beckon slowly. “Come with us.”

The revenant follows you warily as you make your way back up Eagle Street, to the old Moreton Bay Fig at the intersection in the road.


Riverside Fountain: Do you accept he’s too far gone, a monster forever?

“It’s time to end this,” you say. “The next person he lashes out at might die. And it might be one of us. He’s heading straight for Eagle Street Pier. There will be so many people there.” You shake your head sadly. “Krissy, go get him.”

Go past the restaurants towards the river, and walk along the riverfront towards Story Bridge until you find the fountain on your left, just before the Riverside CityCat terminal.