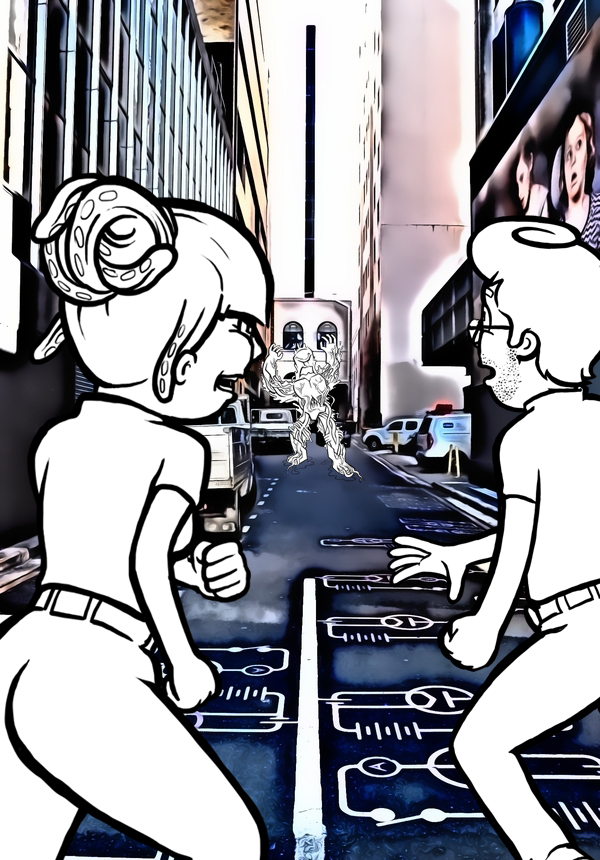 You hear them before you see them. Krissy’s grunts echo from the alley, so loud you can hear them over the rumble of passing traffic. You and Jack round the corner into Edison lane, noticing a splash of blood on the intricate patterns painted on the ground. Krissy is throwing punch after punch at the revenant and strange, purplish waves of colour shiver up her arms. Your stomach turns at the wet sound her fists make as they collide with its rotting flesh.

“Krissy!” Jack shouts, his voice strained. Krissy falters. Only for a moment, but it’s one moment too long. The revenant lashes out, his inch-long nails biting into her arm. She gasps, her eyes alight with a violent lust. The monster takes his chance, throwing his body against Krissy. Her feet leave the ground, her opponent’s unearthly strength sending her soaring through the air. She collides with the wall and a nauseating crack reverberates around the street. She seems to hang there for a moment, suspended on the bricks, until, like slow motion, she tumbles down. Her intimidating strength is gone, and she’s just a regular person — vulnerable and weak. Her limp body disappears from sight, sliding down behind a dumpster.

“Crap…” Jack mutters from beside you. The revenant, with a grin full of cracking teeth, turns towards you. “What do we do?”

“Why the hell are you asking me?” you say, not taking your eyes from the revenant. “Why am I the one making all the choices? You two have the superpowers, for goodness sake!” Jack fiddles with the buttons on his shirt.

“I can’t interfere, not directly you see…” he starts.

“Do something!” you shout, as the monster begins a slow, funerary march towards you.

“I… I don’t…” Jack stammers, pushing his glasses up his nose. “I… Please, could you… I mean… Oh sod it. Stop!” he commands. His voice is strange… deeper, and it sounds like someone else spoke with him. The revenant pauses, his foot hovering in mid-air. His rotting muscles shudder against the command.

“Is Krissy okay?” Jack hisses out the corner of his mouth, not taking his soft eyes from the creature. You cross the alley, hugging close to the wall as you pass the revenant. Krissy is nowhere to be seen, hidden behind the dumpster.

“Krissy?” you half-whisper, half-shout. Bracing yourself against the wall, you push against the dumpster, but it’s far too heavy for you to move. With a glance back, you see that the monster is breaking its bonds, taking shuddering steps towards Jack. “Krissy! It’s going to—” you don’t reach the end of your sentence before the noise fills your ears. A mechanical screech, steel on concrete, pierces Jack’s control of the monster, who spins on his heels to face you. With force like a cannon, the dumpster hurtles across the alley. It collides with the revenant, its momentum blasting the creature backwards. It pins him against the opposite wall from the waist down.

“Ha!” Krissy cries, grinning as she cracks her neck. “That’ll teach you to threaten… my city!”

“Krissy!” You and Jack say together.

“Took you long enough,” you continue. Krissy, laughing, makes a rude gesture at you.

“So what the hell was that, Jacky? You’re commanding the undead now?”

“I guess so,” Jack says, smothering a shy grin. “It makes sense, given… y’know. We should take this opportunity to take a look at it,” he continues, approaching the creature. The monster is taking shallow, ragged breaths, water dribbling from his bloated lips. You try not to notice the way patches of his skin writhe, as if creatures live in his flesh.

“Why is it here?” you ask Jack, but Krissy cuts him off.

“Does it matter? You saw what it did, we need to find some way to get rid of it. Permanently.”

“I read about revenants in the EHU library,” Jack says, his hands hovering above the revenant’s face. “Water revenants are the most common type, usually sailors shipwrecked at sea, or children who drown playing in rivers. You have to really want it — and I mean really want it — to return undead. There must have been something he left behind in Brisbane, an enemy to revenge or a loved one to return to.” Jack leans in, his face just inches away from the revenant’s.

The creature opens his eyes. Jack falls backwards as the revenant’s glassy pupils focus. It roars, a grating guttural sound. Jack scrambles to his feet and retreats with you and Krissy, all three of you taking slow, careful steps backwards.

“What do you mean?” you ask Jack, who has his fingertips pressed to his eyelids.

“The revenant, I can feel something about him. I just need a moment, and some water. There’s still a chance to help him.”

You turn the idea over in your mind. “There’s no way this is all coincidence,” you say. “Every time we’re about to do something about it, the thing gives us some mystical reason why we shouldn’t hurt it!”

The revenant looks as though he’ll free himself at any moment, his arms straining to push the dumpster away.

Riverside Fountain: Help Jack work out what it wants by leading it after you? “We need to give Jack the chance,” you say. Krissy rolls her eyes. Jack begins to walk, he moves swiftly, his feet carrying him along some unseen path. You speed up as you hear the revenant free itself behind you, and begins to follow you. Jack leads you down Eagle St, back towards the river. You turn left at the riverfront and continue on until you’re at the fountain next to Riverside CityCat terminal.

Post Office Square Sculpture: Do you decide the monster is playing you all?  “It’s too suspicious,” you say, shaking your head at Jack and turning to Krissy. The hero sprints towards the revenant as he frees himself and takes off in the opposite direction. Ignoring Jack’s protestations, you sprint from the laneway with Krissy. Jack harrumphs and follows.

You turn left onto Creek street, and left again onto Queen. You cross the road and find yourself in Post Office Square.