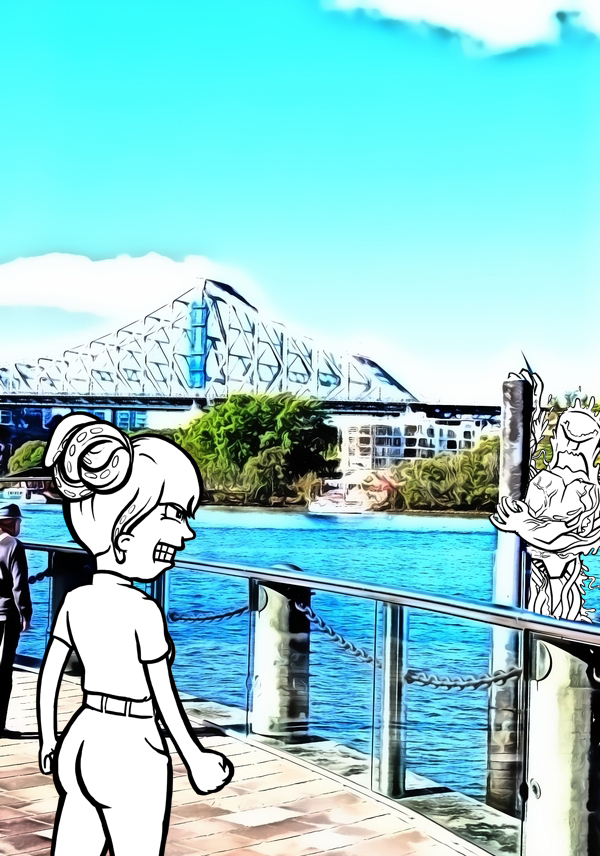 You and Jack trail behind, catching up to Krissy at a fountain opposite the Story Bridge. She is leaning on the railing, swearing. More so than usual.

“He went back in the water.”

“That’s good though, right?” you say. “Back to where he came from.”

“He went back in the water and swam like a million miles an hour and now he’s climbed up onto the Story Bridge.” Sure enough, you can see the black-green figure on the Story Bridge, cars braking madly and trying to drive around him. The revenant jumps on the bonnet of a maroon Audi and begins to bang the windscreen.

“I can’t get across there quick enough, I’m super strong not super speedy,” Krissy says. “And anyway I… I can’t swim.”

You and Jack exchange glances. Who lives in Queensland and can’t swim?

“Shut up!” she protests. “I don’t like the water. You can’t punch it if it annoys you.”

“Don’t look at me, I’ve got nothing,” Jack says. “The big guy upstairs never trained us for this.”

“We had revenants too, out in sector al… where I’m from. Only two ways to kill a water revenant,” Krissy says. “Light it up, or squash it. Can’t do either from here.”

Then, out of nowhere, bells start ringing from far away. The revenant has jumped off the Audi and is standing, transfixed by the sound.

“He’s jumping back in the water,” Krissy gasps.

A furious white wake cuts the big brown river. Here he comes, desperately, urgently. He’s on land again in seconds, leaping onto the ferry pontoon and blurring past towards the sound that has made him so frantic.

“The bells!” Jack says, snapping his fingers. “Wedding bells. He’s come back for his wife; he’s come back for Penelope. He doesn’t realise she’s long gone. We need to get to him before he realises and does something none of us want!”