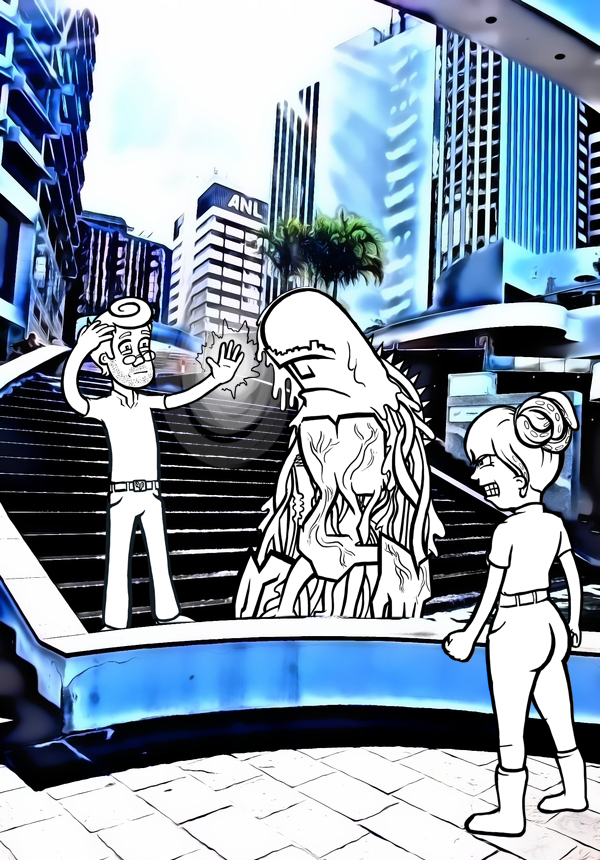 The water trickles serenely, and Jack breathes a sigh of relief. The creature, staggering in his rags behind you, stumbles to a halt.

“Here. This will do.” Jack kneels before the water, allowing the tips of his fingers to just brush the surface. “You’ll need to do this,” Jack says to the revenant. “You’re the source of the memories.” The monster’s face screws up, his decaying nose turned up at the young man.

“Oh for… will you just do it?” Krissy snaps, waving a hand at the revenant. “I know you don’t like Jack’s kind but would it kill you to cooperate for once?”

“Thank you,” says Jack. “He was a human, you’re a human. Krissy and I are too… different. He can’t handle it.” You kneel beside Jack, and you touch your fingers to the cool water. You reach out your other hand and you suppress a shudder as the revenant takes hold. His skin, cold and slimy, send ice up your spine.

“Hold the image of the revenant,” Jack speaks to you, but the creature leans in to listen. “Bring to mind everything you know about him, and focus on the shapes in the water.” Ripples shimmer across the surface, and the random movements begin to form images… a face. A young woman stares up at you from the water, her features made from ripples and light.

“Penelope,” you say. At the name, the revenant gasps a little. “His wife. That’s why he’s here, he thinks…” You see her walking beside the river. “He thinks she’s still in Brisbane. He doesn’t realise how much time has passed.” The water moves and changes again. Penelope’s face disappears, replaced by plants and stone. “A graveyard. She’s long dead.”

The shapes in the water fade, the patterns splintering back into random ripples. You look up, into the revenant’s wet eyes. He stares back. A bell, a peel of clanging iron, tears through the air between you. Note after note, the bells toll a familiar tune. The revenant disappears like the images in the water — there one minute and racing up the street the next.

As Krissy and Jack stare dumbfounded at his receding silhouette you cry, “Wedding bells. He’s going to St. Stephen’s Cathedral!”

You jump to your feet and race up Wharf Street, your mind reeling with thoughts of the revenant and all that he’s lost.