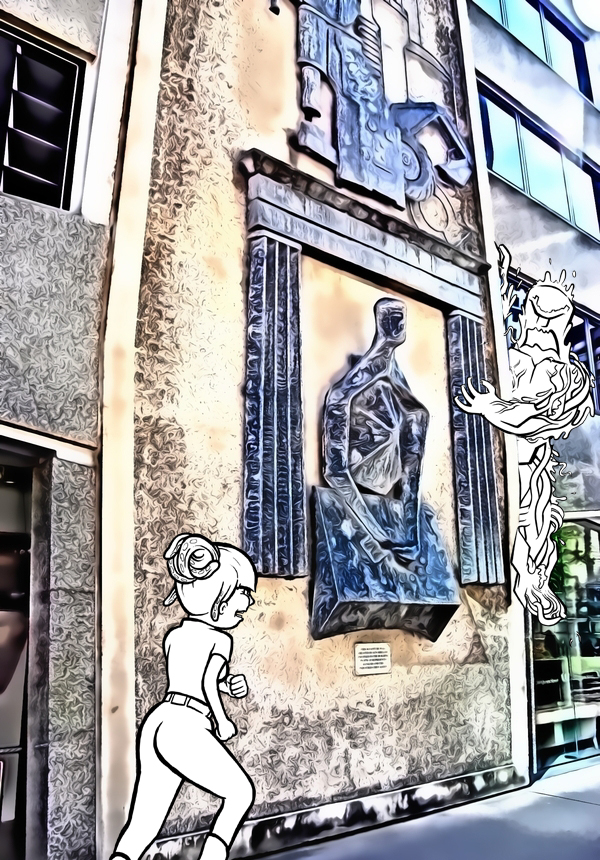 You’re close behind the monster, who is scattering the screaming crowd with swipes of his claws. He vaults over the cars and across the street in one great leap. He cracks the pavement as he lands in Post Office square, and the force of his landing shakes the buildings. The revenant glances over his shoulder and his mean green eyes narrow when he sees you and Krissy following. He leaps again, crashing into the sculpture that’s mounted on the Westpac building.

“He’s getting stronger!” you call to Krissy over the noise of the traffic horns and screaming tourists.

“We have to end this. Soon,” she replies. You pick up speed, but Jack grabs the back of your clothes.

“Stop!” he cries, and you skid to a halt just in time. The sculpture, dented from the monster’s impact, slides from its mounting, and crashes to the pavement. The revenant leaps out of the way, and the falling debris only narrowly misses him. He and Krissy exchange snarls.

The peal of a bell rings about the city. Then another, and another. Church bells — wedding bells. The revenant straightens, his ears pricking up. He turns on the spot, like a radar trying to find its mark. His face changes into… a smile?

He moves back towards you, leaping over your heads. He scales the Post office building and disappears from sight. You dash after him, towards the bells sounding from St. Stephen’s Cathedral.