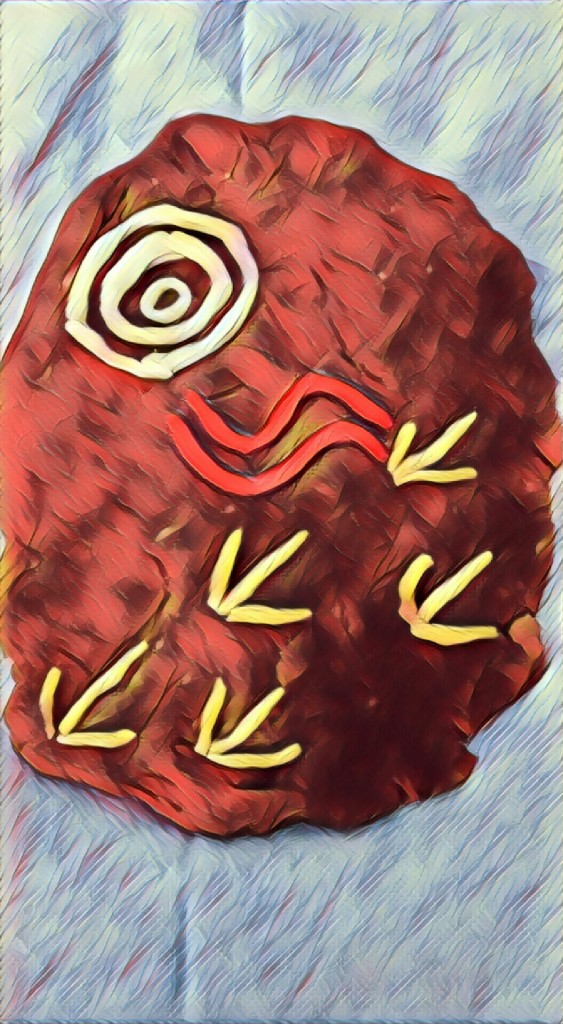 Titania points her wristband at the strange posts and acquires them as well.

“My navigation mechanism,” she explains. “Do you know much about Aboriginal art?”

“It varied across the continent. Traditional materials include charcoal, ochre for painting and stencilling, and sharp tools for tree carving and rock etching. Pictures were often drawn in the sand with the artist creating the piece from all angles, giving the artwork a bird’s eye view or aerial perspective. Many of the pictures are in the form of a map, but not the sort of map you’re used to. The maps also include temporal elements showing characters moving about in the story being told within the picture. Animals are often represented by the tracks they create. Water can be shown by concentric circles to represent a water hole, while parallel wavy lines signify a creek or river.

“All the art appearing on the trail were new works commissioned from Aboriginal artists in 1993, however rock paintings in Queensland date back over 30,000 years. Some of these depict Dreamtime stories of spirit beings creating the land and everything in it. These paintings have the same spiritual significance as stained glass windows do in a European church. Some artworks are restricted based on age or gender. Other rock art shows animals that are now extinct.

“Since the arrival of white man, artists have included new materials in their artwork. Acrylic paints are used in some of the pieces on this art trail. Artists in aboriginal communities also use canvas and colours to produce new works for sale. All the artwork on this trail uses the traditional ochre colours of red, yellow and brown, and black and white. The artists are descendants from different Aboriginal tribes, and the stories behind the artwork have been passed down only to the members of that tribe.”

Titania heads off along the path to the left. You grab a stick and draw a quick sketch of her in the sand, adding in concentric circles for the waterhole, and drawing a spotted tongue protruding from her bugle.

She turns right at the start of the art trail, pausing to look at the art work. You fall into step with her, enjoying the peaceful forest. The one thing ruining your sense of calm is that every so often she’ll look at you and run her tongue over her bugle…

When you reach the boardwalk Titania makes a noise halfway between an oink and an elephant’s trumpet, which you realise is an alien laugh.