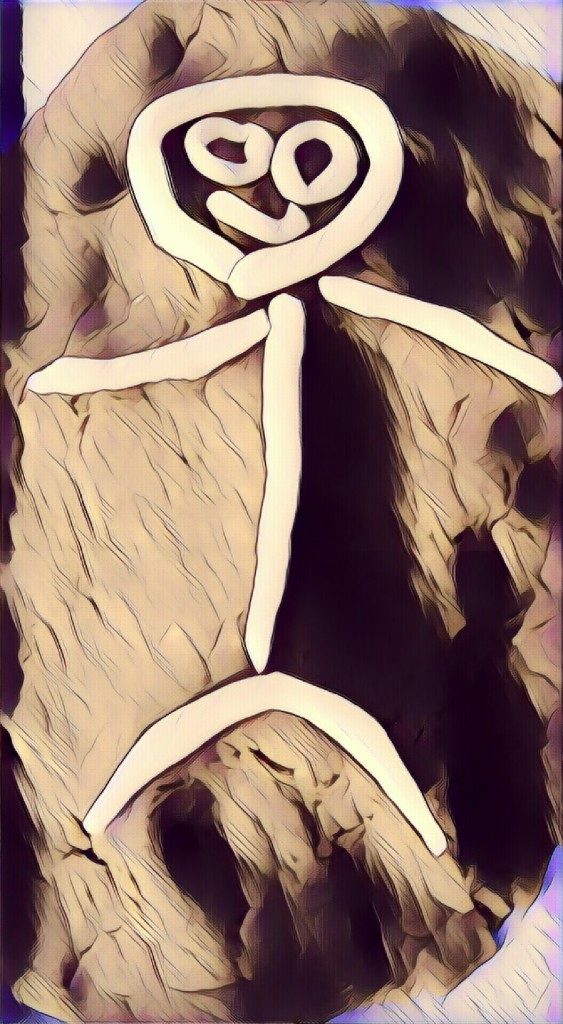 “That picture there,” she says, pointing to a painted human shape on the rock across the gully. “It looks exactly like the pictures my grandmother drew of humans when she returned from her time on Earth.”

“Did she draw this one?”

“No. One of the artists did. It’s Biami. The story of Biami varies amongst the tribes who tell it.  For some Biami is the creator who brings light into the world, in others a wise man who was given a spirit form to protect the tribes from harm, in others a spirit who created rivers, forests, mountains and also the first initiation site.”

“Initiation sites, or Bora rings, were an important part of Aboriginal life for tribes living in south-east Queensland and some parts of New South Wales. Bora rings could be a raised circle of earth, around 20 metres in diameter. Mt Coot-tha is a sacred place to the Turrbal people as there was a Bora ring on the mountain. Initiation ceremonies are private, only for the initiates and those who have previously been initiated. Men cannot witness women’s ceremonies and women cannot witness men’s ceremonies.

“Part of the initiation ceremony involves leaving a permanent symbol on the body to show that the initiate has become an adult of the tribe. This could be marks in the flesh, removal of a tooth or the end of a finger, or even an ear or nose piercing. Not unlike what a lot of humans choose to do for body art these days.

“But the important thing here is the drive belt for my spacecraft.”

Titania aims her wristband at the wooden steps that lead from somewhere under the boardwalk towards the painting of Biami. The 3-D laser grid captures the steps and sucks them into the wristband.

“Onwards and upwards, eh?” she says, continuing across the boardwalk and along the track until you reach a arrangement of stones in the shape of a serpent on the left.