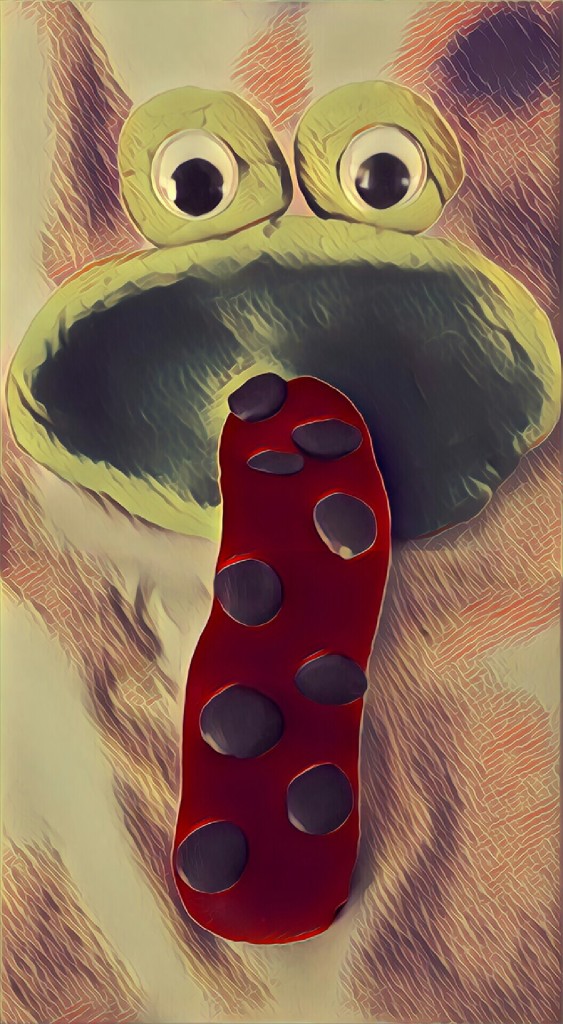 “Here it is!” squeals Titania. “The flight deck! I can go home!”

But your attention is drawn to the artwork on the rocks ahead and to the right.

“Look,” you say, “there’s Biami, stencils of hands and boomerangs in… looks like ochre. Oh! And a couple of serpents and some kangaroo tracks.”

“Yes, yes,” says Titania as she fiddles with her wristband.

You sense that as soon as she has her spacecraft together again she’ll zoom off into the cosmos, and you haven’t even taken a selfie with her.

“What about those trees?” you say desperately, pointing to a pair of tall pines directly in front of you.

It seems to successfully distract her. She looks up with a frown of disapproval, probably at your continuous ignorant questions.

“They’re Bunya pines, which are not actually part of the pine tree family. Bunya pines produce a large cone which encases the bunya nut, a tasty and valuable food source for the local people and invitees from distant tribes.

“The Bunya pine fruits every year, but every two to seven years it produces a bumper crop. On such occasions the local tribes would invite others to come and share. This was known as the Bunya festival. The Turrbal people walked to the festival in Wakka Wakka country along the track Old Northern Road was built on.”

“How would the local people tell the other tribes it was a bumper crop year?” you ask.

“Well, the Aboriginal people respected other tribes and would not set foot in another’s Country without permission. In order to send and accept an invitation, a message was carved into a message stick, roughly the dimensions of a 20-cm ruler. The message would say how many people were coming: adults represented by open circles, children represented by dots, when they were coming with pictorial details of the season, and the purpose of their visit. To deliver the message stick, a runner would enter another tribe’s territory, calling out. He would be met by a runner from the other tribe who would take the message stick to the elders, then return with their response on a message stick that the original runner would take back to his tribe.”

“Not really. The runners were kind of the equivalent of modern-day postmen.”

“What happened at the festival?”

“Hundreds, if not thousands, of aborigines would come to share in the feast. They didn’t need to limit their diet to nuts at this time. The supply of nuts also attracted animals in large numbers which provided an alternative food source for the people gathered there. I’m getting hungry just thinking about it.”