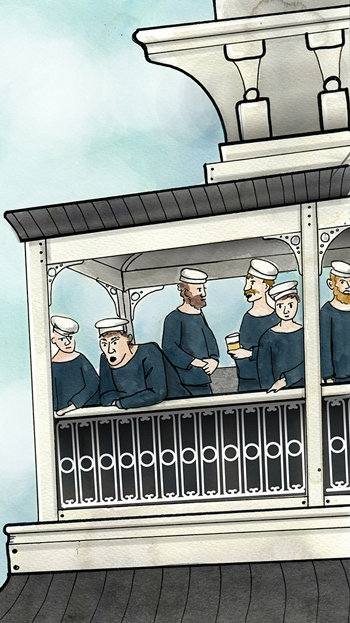 You enter the traders’ district, an area known for its ‘numerous hotels, where rival gangs of Wharfies and Sailors often ‘come to blows’, according to the handbook.

The Sailors bellow their distaste for the Wharfies from the balcony of the Royal Arms Hotel as you approach.

“Man Overboard,” one sailor shouts, glancing at you. “What’s that you’ve got on your shoulder then?” They all stare at the animal perched by your side.

The Sailors disappear for a moment and then appear again as they exit the Royal Arms towards you. They’re most curious and, in their distinctive English accents, ask a barrage of questions.

“I’ve sailed to the Orient and seen nothing as amazing as that!”

“Our King would be thrilled to receive such a prize!”

“How much would it take for you to part with the creature?”

You think quickly, “Well, I’m in search of ship pieces to repair the City for Adelaide Clipper – do you think you could help?”

“Ah yes! That used to be the HMS Carrick – I used to man that ship! We’re struggling to offload some pieces we reclaimed from the Wharfies. In return for your prized possession, you’re welcome to whatever you need!”

“You’re in luck, we have all those items for the ship, but in terms of cargo we only have wheat. I’ll get the men to transport it along the tunnel to the Wharf right away!”

You reluctantly hand over the creature and ask, “What tunnel?”

“Careful Abbot, the kid could be a spy.”

“It’s a bit late for that Flannigan, the cat’s out of the bag.” Abbot leans toward you, voice low. “We intercepted a Wharfie tunnel from the Dock Hotel via our own, a bit of revenge you might say.”

The offer by the Sailors appears honourable as metallic charms for all of the ship pieces and the Wheat materialise on the skeleton key chain. It briefly draws their attention until a panicked Sailor rushes over with news.

“Captain, the Wharfies are assembling for battle on Todd Street outside the Port Dock Hotel!”

“That’s it!” Abbot growls, beckoning to you. “Do you see that Old Fisheries building over there? That used to be a picture of me, until the Wharfies defaced it.”

You follow Abbot’s finger to the towering building further down St Vincent Street, and the impressive mural there.

“Time to sort this out once and for all. Men, arm yourselves,” Abbot shouts, and the group militantly assemble.

THE WAREHOUSES: Part ways with the Sailors and investigate the Warehouses in search of the remaining cargo? Then walk past the Old Fisheries building on St Vincent Street, left onto Wauwa Street, right onto Santo Parade and past the Colac Hotel.

THE PORT DOCK HOTEL: Feel obliged to see the troublesome Wharfies get a bit of comeuppance at the Port Dock Hotel? It is a short journey around the corner and up Todd Street, past the succession of old red brick facades.