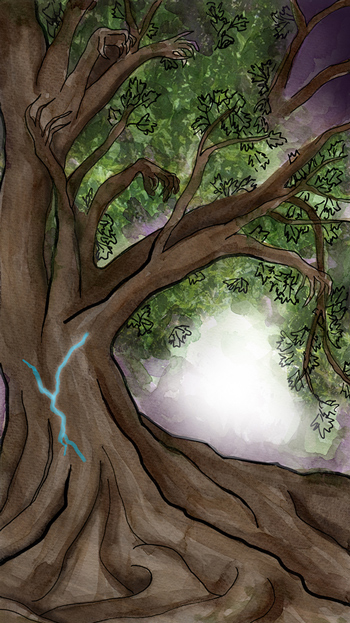 Too late you realise the zombie has been distracting you. A series of vines have descended from the tree canopy, snatching at you.

The zombie’s decayed upper torso slithers down the tree, like a serpent. It has no legs, but its body is akin to the biology of the tree, woody and sinuous…

You frantically look for an escape route and notice that the vines avoid direct sunlight. You immediately leap to your closest patch of light, then leap to the next, and the next, steering clear of the shadows.

Suddenly the sun dips behind a cloud and two vines whip out at you, looping around your wrists. You’re stuck fast. As you struggle, the zombie hauls itself along the ground, using each paver like a ladder.

You look up at the stubborn clouds that haven’t passed. You pray the wind picks up. The zombie gets within a metre and grabs your foot, pulling you towards him. You kick him in the jaw, hard.

Suddenly, light beams through the canopy. You yank the vines around your wrists into the light and they fizzle away. As they loosen you’re able to make your escape to the safety of the open sunlight.

There’s no way you’re going to head back past those trees. Your only option is to head along the wharf towards Hart’s Mill, which is known for its production of Flour – one of the remaining cargo requirements.