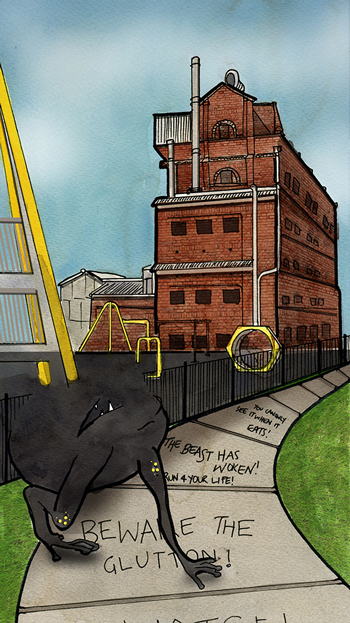 ONE: LURE THE GLUTTON OUT

You approach the café and find a delivery box by the entrance – jackpot! You scan through the box with increasing frustration, finding nothing but children’s party props and every cake ingredient except flour! But all is not lost. You remember a cooking program you’d once seen and decide to grab the baking powder and the water balloons.

You then pull John’s wooden doll from your pocket. On close inspection the doll turns out to be a ‘Matryoshka’ doll, which separates around the middle to reveal another smaller doll within. You fill each of the Matryoshka dolls with baking powder. Then you bend over the edge of the wharf to fill the water balloons.

As you peer over into the water you notice a layer of discarded skin floating on the surface. It’s like a snake skin, but much larger and stretchy. Could it be from the Glutton? As you scoop it out the skin catches the breeze and you realise it could make an excellent Sail for the ship! A charm of the ship sail suddenly appears on the skeleton key chain; an unexpected bonus!

Armed with your filled dolls and balloons, you head to the playground where you line up the dolls like breadcrumbs, before taking refuge in the Pyramid Tower with the water balloons. With the bait set, it becomes a waiting game.

Footsteps across the corrugated roof of the Mill sound again, followed by a thud, which you suspect is the invisible ‘Glutton’.

Suddenly the largest doll is whipped up off the ground. It becomes lodged mid-air and the Glutton starts to become visible. It is truly disgusting. Long legs double back like a frog’s, barely supporting its colossal gut. It has no neck but instead its head protrudes, which is virtually all mouth, a toothless, dribbling cavern.

The Glutton’s attention is quickly drawn to the line of other dolls. It plods along, swiping up each with its long, mutated fingers. One of the dolls cracks open and the Glutton starts to choke on the concealed baking powder. You fist pump the air in elation, causing the skeleton keychain of charms to jangle against the side of the Pyramid Tower.

The Glutton’s beady eyes lock onto you and it charges. It squeezes through the gap at the base and struggles up through the Pyramid. As it lunges toward you, you launch the water balloons, which burst on impact inside the Glutton’s mouth, washing the baking powder down its throat.

The monster falls back onto the middle floor and starts frothing at the mouth as the baking powder begins to react with its stomach acid. You throw yourself backwards down the tubular slide in time to see one last desperate lunge by the Glutton. It becomes lodged in the entrance to the slide with its belly rapidly expanding.

The Glutton lets out a whimper, and its belly bursts! A tide of stomach juice and Matryoshka dolls explode down the slide, completely consuming you.

The Glutton is no more!

Shaking off the slime you retrieve the bag of Flour from the doorway of Harts Mill. It vanishes and reappears as another charm on the skeleton key chain.

As you exit the Mill, you’re stunned to see the City of Adelaide ship has drifted around to the water’s edge by Hart’s Mill whilst you were distracted in battle.

Click the link on the screen to deliver your cargo to John.