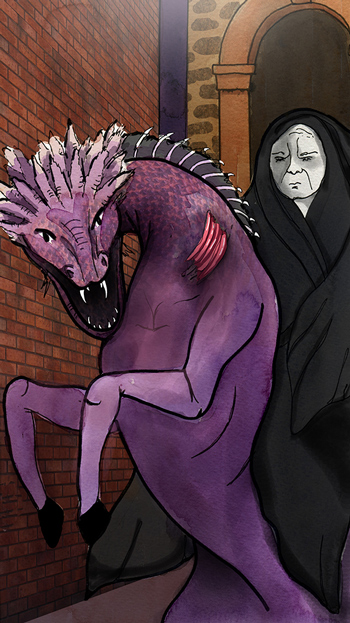 Lipson Street and Divett Street are lined with impressive stone buildings. Some appear sunken; cellar windows only partially visible at ground level. You hear cries for help from one of the cellars and rush to investigate further, but the cries fall silent.

Your attention turns to the understated building of Henry Weman’s Sailmaker & Ship Chandler on Lipson Street. It appears closed but you see a laneway down the side of the store and wonder whether there might be any stock available to the rear.

You walk down the alleyway to an eerie and silent courtyard. You feel exposed, as if someone, or something, is watching you…

The silence is shattered by menacing cackles that echo from multiple directions. It’s then you hear the distant sound of… hooves clattering along the road? They sound heavier than a horse’s. Then, like a nightmare, a darkened figure upon a beast flashes past the end of the laneway junction on Lipson Street.

You hastily flick through John’s handbook for information. There!

‘A creature of the undead, forged by the rider from borrowed parts of mythical creatures. One slain creature pecked the rider’s eyes out and now it senses its victims in other mysterious ways’.

The menacing canter stops and, trembling, you look up. The rider’s hood is drawn back to bare his face. Its wrinkled, charcoal skin forms an angry expression, but his eyes are stitched together.

The beast he rides has the neck of a serpent, which arches low. Its eyes are completely white its and fetid breath is thick with the scent of kerosene. A bloated protrusion on each side of its neck pulsates like lungs and, as it draws breath through its gills, licks of fire rise from its nostrils.

If you have the SALAMANDER, you can rely on it to repel the fire.

If you have the CRANE you can use it to escape.

If you have the GRIFFIN you can attempt to fight the creature.

Or, if you received the COAL from the Wharfies you can use it to quell the beast.

Select your choice by tapping the link on screen