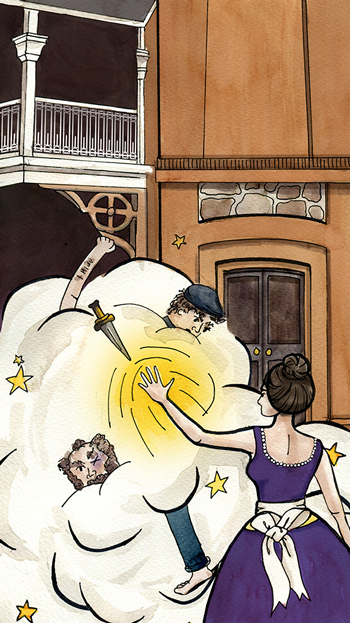 You approach the Port Dock hotel to find a band of Wharfies congregating outside.

You catch part of a heated discussion between them.

“That was our coal; those Sailors stole our cargo!” one shouts.

“It was probably in retaliation for the ‘mural’ we did of their captain on the Old Fisheries Building”, another snarls.

You quickly decide that this might not be the best place for you to be as you turn to find a rival gang, the Sailors, approaching up Todd Street, with you in the middle.

As the gangs see each other, they charge. “That’s it, let’s show these Sailors who runs the Port!”, a Wharfie cries.

The gangs collide like a disorganised scrum. There is little regard for their surrounds as windows are smashed and carts of goods are knocked over. Amongst the items scattered, you’re drawn to fragments of Gold that spill out of a velvet sack.

As you kneel to refill the sack you check to make sure no one is watching.

You’re spotted by a Wharfie from on top of the Hotel, next to the Ship and Compass sculpture. You hurry yourself with the gold, anticipating an onslaught, but from the Hotel entrance an apparition of a woman appears. She is elegantly dressed in a Victorian corset that is laced tight around her waist and a dress that splays out, hiding her feet.

You snap out of the vision to glimpse a dagger hurtling through the air toward you.

Suddenly the Lady appears next to you, one outstretched hand shielding you, the other halting the dagger in mid-air.

Time seems to stop for all but you and the Lady. In her upturned hand rests an hourglass, sitting upon its side. Time, like the sand within, has ceased to flow.

“Your time here is almost up,” she says. “I sense you’re trapped by forces not of these lands…I won’t allow time to stand still for long. Do what you must before the time is up.”

She walks back to the Dock Hotel with the sand timer turned, allowing grains to fall through once again.

You glance across the static crowd and see they begin to decay, like time is chewing everything up and reducing it to grains of sand. Is this what was happening to John?

You fear the same will happen to you if you don’t get to the City of Adelaide ship straight away, amidst the swirling sands.

As you make your escape the Gold fuses to the skeleton key chain as a charm.

Whether you’ve got all of the necessary items or not, you’re going to have to rush to the City of Adelaide Ship by the water’s edge, to escape the conflict on Todd Street and ravages of time.

If you have at least 2 ship pieces and 2 cargo items, tap this link when you reach the ship.

If you are yet to find the required number of items for John, then tap here when you reach the City of Adelaide Clipper

TO REACH THE CITY OF ADELAIDE CLIPPER, HEAD NORTH-EAST TOWARDS THE WATER