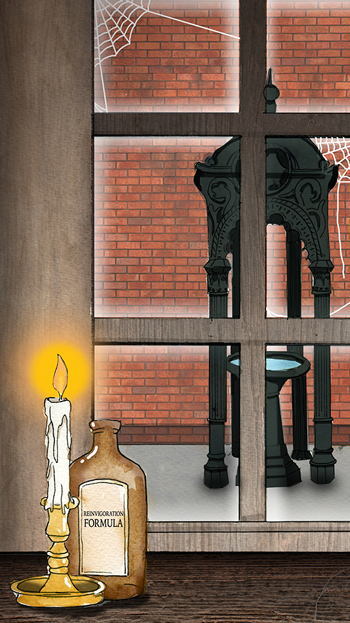 The second floor of the old stone and brick building has a sign reading: ‘William Russell, Sailmaker and Ship Chandler, established 1870’.

You stick your head inside the store to find the walls are stacked high with oddities up to the roof. Dappled light filters through the filthy windows, enough to spot an older chap half way up a ladder, rummaging around a jar of pickled eggs like a child in a lolly shop.

He cocks his head and eyes you through thick glasses. You notice a metallic horn attached to a thin chain tucked into his waistcoat pocket, labelled ‘Willy’s’. You wonder if he can hear you through the tufts of hair that sprout from his ears.

With a little more volume you assert, “I need a Sail, Wheel, Mast and Anchor.”

Willy squints at you like you’re insane, then wedges the thin, tubular end of the horn in his ear. “You need to mail a seal to the last banker?”

“A SAIL AND A SHIP WHEEL, A MAST AND AN ANCHOR!” You bellow.

He nearly falls off the ladder. “Alright, alright, no need to shout”.

He sticks a finger in his ear and rings it around to pull out a lump of earwax. He adds it to a bucket labelled ‘home made candles’, before sliding down the ladder.

He leans across the counter, hands clasped tight. “I’m afraid it’s too dangerous for me to fetch any stock. The Wharfies are pinching anything they can get a hold of. I’d never hear them coming.”

“Who are these Wharfies?” you ask.

“They’re bullies, they buy from me and sell to the Sailors for a huge mark-up. I tried to sell direct but the Wharfies threatened to set fire to my shop, and they’re not even the worst…other things roam the street. Things not entirely human.”

You sigh. “I really need those items. Is there anything you can do?”

He pulls out a small, dust-covered bottle of water from under the counter. “You need protection! John Formby may be able to help – just make sure his animals have enough water”.

You don’t quite understand, but pick up the bottle and see a label that reads ‘Reinvigoration Formula’. Before you have a chance to ask any further questions you’re ushered out the door.

Willy points further down St Vincent street to a black cast-iron structure, outside the imposing red brick facade of the police station on the opposite side of the road.

You rush down to discover it’s the John Formby Memorial Fountain, commemorating one of Port Adelaide’s former mayors. Amongst the fountain’s intricate patterns, several creatures become apparent, which you recognise from the handbook. You flick through to the sketches, which are accompanied by a passage:

‘If awoken, the creatures of the fountain are said to possess incredible powers. Observe carefully and you will see a powerful Griffin, a cunning Salamander and a wise Crane’.

Which creature do you pour the reinvigoration water over?

One – Select the Griffin

Or, Three – Select the Crane

Select your choice by tapping the link your screen.