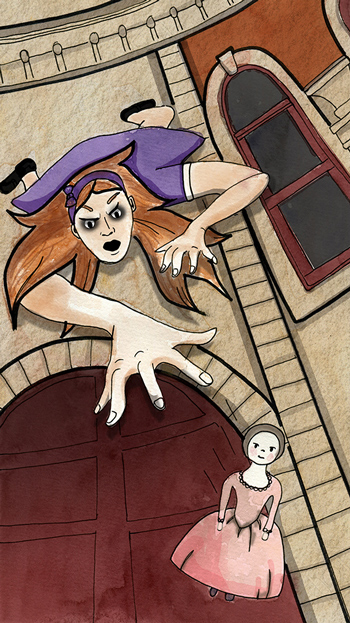 Beyond the Colac Hotel on Santo Parade are some grand stone warehouses that once thrived, until the docks were partially filled in to make way for new development.

A soft mist has risen up from the ground, wreathing the warehouse’s façade of arching pediments in a soft glow. Above you, the lettering on the crown of the building reads, ‘Wool Stores’.

You stroll to the main entrance, but it’s locked. You pull out John’s Skeleton Key and try that, but it pops back out.

You’re startled as the voice of a child shouts down from the third-floor. “Who are you?”

You take a few steps back to see into the window.

A girl in a scruffy frock looks down at you with great curiosity. “I’m Annie. Have you any toys? They won’t give me any because they say I don’t play nice.”

The girl puts you on edge somehow. “Are you….real?”

She ignores the question. “Why do you want to get in here?”

She giggles. “You need to get in and I need to get out. I might have some wool… have you got anything to trade?’

You stare at her suspiciously, but recall that you still have the wooden doll toy John left behind. You hold up the toy. “What about this?”

Her eyes light up. “Yes, give it to meeee”, she hisses…

“No toy unless I get the wool.”

“You mean this wool? Maybe I’ll keep it.” She holds up a bag, tauntingly.

“Maybe I’ll snap this doll in two,” you retort.

Annie scowls but throws the Wool down. As you take it, it appears as another charm on the skeleton key chain.

You throw the doll up, but it doesn’t get high enough. Annie sees the throw fall short and scurries out, like a spider, clinging to the surface of the building to catch the toy. Once caught, she scuttles back through the window out of view.

You start to back away.

A series of crashes comes from the warehouse. Then, a roller door at the end of the alley slowly rises, releasing plumes of dust. Out creeps a pair of wooden legs as high as the roller door. The rest of the figure emerges, bent over backwards in a crab like stance. As it unfolds, you find a supersized version of the wooden doll you threw to the strange child.

The huge beast arches down, looking at you with its beady eyes and in a familiar voice hisses, “Play time.”

You flee and the doll immediately gives chase, pursuing you back down Santo Parade. You run, to the sound of branches being ripped from trees and the stomping of cars close behind.

You must head for the City of Adelaide Clipper post haste! You can see it in the distance, over Wauwa Street and across the vacant car park.