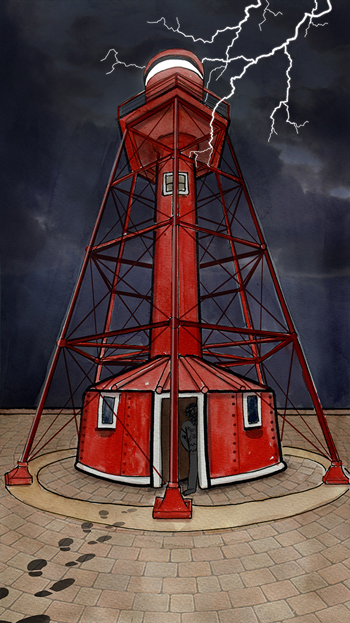 At the end of Commercial Road you see the iconic white and red Lighthouse, but the light inside is not currently operating. The door at the base sits ajar and you creep in, drawn up the steep and spiralling interior. The panoramic view at the top allows you to see right across the water and along the wharf.

You flick through the handbook John left to see if the Lighthouse featured. To your alarm it reads ‘Under no circumstances approach the Lighthouse. It is frequented by a tormented individual whose spirit still resides nearby. The former Lighthouse keeper was blamed for some ships that never made it to shore and the anguish drove him insane.

‘He was branded ‘Red Riley’ by the angry community, who tattooed ‘RR’ on his forehead.

‘One stormy evening, Red Riley clambered up onto the roof of the Lighthouse. Just as he was about to throw himself off, he was struck by lightning and mysteriously vanished’.

Gazing out across the Port your eyes are drawn to some curious flashes of light upon the water. Almost like footprints on the surface; footprints coming towards you. Uh oh.

You charge down the stairs towards the exit, but as you reach the door your clothing catches on some exposed fuse box wires. Each attempt to pull away tangles you further. You glance at the water but can see no further activity…except that there is now a trail of wet footprints appearing on the paving, coming towards you.

One – Double your efforts to remove your clothing and escape?

Two – Look for something to throw at the oncoming foe?

Select your choice by tapping the link on screen