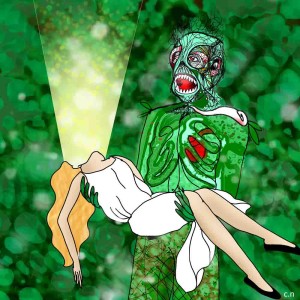 You appear beside Lucy in front of the monument marking the flood of 1974. You look at each other becoming aware of your senses again.

“That was unreal!” You say.

“It’s more real than you think. But fun, right?”

“Bloggo will find us here, and we’re going to save his Helena with this.” She holds up a tiny tube filled with a red liquid.

“Yes. She’s the reason we’re going to this trouble. He wasn’t always that way. He’s just a regular guy, a scientist too. Back in ’74, Helena and him were trapped in a lab while fooling around as young lovers do and were caught in an explosion in the lab caused by the floods. Next thing he remembered was waking up on the river banks like that. He searched desperately every night for Helena and decades later, in the 2011 flood he found her lying unconscious in a tree, still young, still beautiful. The same environment that preserves him sustained her body in the depths of the river’s soil and kept her alive.”

“How do you know all this?”

“I discovered him in our labs when I stayed back late one night and he told me. I thought I was as good as dead but turns out he’s a real sweetheart just searching for a way to salvage his love. So I’ve been helping him find a way since. Love will do that, if it’s yours or not.”

“Those men in suits, what do they want?”

“They’ve been weaponising our research without our knowledge, and experimenting on Bloggo. It took them years to capture him. That’s why I couldn’t have you talking to them.”

You are startled by the leaves that rustle from the river bank toward you. Bloggo reveals himself from the marsh, more vigorous than when you first met. He’s holding a pale slender woman with long wavy red hair in his arms. She’s unconscious.

“I’m glad you both came. Thank you for doing this.”

He lays Helena on the grass and holds his hand out. Lucy hands him the potion. He flicks the cap off the tube and pours it between Helena’s lips, tipping her head forward. He lays her head to the ground and rests his hand on her heart. We all watch and wait.

Her eyes twitch behind her eyelids. The roots of her hair richen in colour and spread to the tips. Her pale blue lips become red. “It’s working,” Lucy says.

Then, a blast of energy moves through Helena, arching her body off the ground. You can hear Bloggo hold his breath.

Her body settles. She blinks until her gentle blue eyes are wide open staring up into the ether. Bloggo’s mouth is left agape and tears soak into the bark of his cheek. Helena looks at the creature holding her and smiles.

“You better hold me like this every morning when I wake up,” she says.

Bloggo chuckles through his joyful tears and embraces her.

Bloggo looks up at you both and mouths the words, “Thank you.” Lucy’s eyes glisten as she blows him a kiss.

He places his arm around Helena who smiles goodbye. They turn and walk along the river until they disappear.

“Is that a better story than you’d imagined for your article or what?” Lucy playfully nudges you. You smile, glad that you trusted the strange woman and could play your part in name of love.