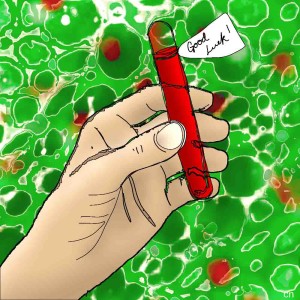 You make it to Harmony Gardens unnoticed and stand before a large instrumental sculpture wondering why on earth she sent you here holding a sandwich. You look down at the sandwich in your hand and unwrap it. Yep, it’s just a sandwich: ham and corn relish. But, wait, there’s something written underneath the wrapping: ‘C – E – E – E – F – F – E’

You look up at the chimes and your brain clicks. These are musical notes. You find a stick nearby and stand in front of the chimes. You try your best to recall school music lessons and look for C. You count eight tubes in from the left and clang it with your stick. Then, three times on the second tube to its right: E, E, E. Followed by two clangs, one tube over: F, F, and one tap on the tube to its left: E.

The tune sounds familiarly catchy. You hear piano keys mimic the notes you just played. As you have that annoying feeling of trying to “name that tune” you’re distracted by a click. It came from the name plaque on the podium on your right, the side printed in braille.

The plaque is slightly ajar like an unlatched jewellery box. You carefully lift it and peek inside to find a glass tube that could fit comfortably in your palm. It contains a rich red liquid and attached is a note with the same handwriting from the sandwich wrapper: Good luck!

You grab the tube and suddenly feel cold in a shadow cast over you. You hear the creak of tree branches grinding together. You don’t want to look but can’t help yourself. Bloggo is towering over you, looking much healthier than when you first met.

“Lucy sure has a sense of humour,” Bloggo says looking at the chimes.

He’s more intimidating this close, but while you’re frightened by his presence, you’re more bothered that you can’t figure out that damn song.

“It’s our song,” he says, rocking from side to side a sweet smile on his bark-y lips.

“No,” he chuckles. “Me and my Helena. That was our favourite song just before the accident happened. Hooked on a Feeling by Blue Swede.”

“I wasn’t always… this. I was once just a normal, young man in love wanting to make something of himself. I was studying for my master’s degree in science just across the river at UQ.”

He lowers his head and his eyes become pensive.

“One afternoon, January 27th, 1974, the day Brisbane flooded, Helena visited me in the labs. It had been raining for days. All she wanted was to dance in the rain. I needed to focus on my experiments but she was just so god damn persuasive. But we were there too late, the waters had crept in and short circuited my experiments causing an explosion. Her kiss is the last thing I remember before waking alongside the river alone looking like this.

I searched for decades, hiding in the darkness, but it wasn’t until 2011, the next big flood, that I found her cradled in a tree along the river bank. She was exactly as I remembered her, beauty preserved but unconscious.”

He gently grabs the tube of red liquid from your hand. “For the last few years I’ve been working on an elixir that’ll bring her back.”

A demanding voice cuts through the story’s spell. “Stop what you’re doing!”

You jump. A team of agents charge toward you from the main road with pistols drawn; four maybe five that you can see. Bloggo crouches into a fighting stance and snarls like a cornered beast. He pushes you behind him with a hand the size of your torso.

The agents slow and aim their weapons. One looks like a net cannon and the other, a harpoon. Bloggo roars, blowing everybody’s hair into a frenzy.

Bloggo holds out the elixir behind his back while fixing his fierce glare on the agents. He mutters, “Take it. Meet me by the river swamp under the bridge; I’ll deal with this.”

“Then you still have a chance to save Helena.”

Under the Eleanor Schonell Bridge: Grab the elixir and bolt for the river to the footpath beneath the bridge? After all, you don’t want to be the civilian casualty. And if Bloggo fails, maybe you have a chance of resurrecting his lost love for him, it’s the least you can do.

South Brisbane Cemetery Gates: Grab Bloggo’s hand, forcing him to follow you to try and lose them? After all, they have captured him once before. Weave behind the chimes and totems of the sound sculpture and the trees that’ll increase your chance of escaping. Follow the path to the main road and continue until you reach the gates of South Brisbane Cemetery.