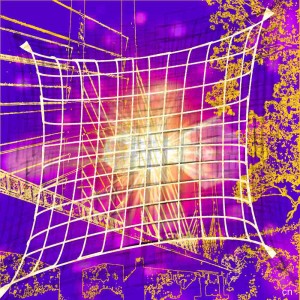 Under the Eleanor Schonell Bridge (Park Side)

You stand beneath the bridge between its pillars reminding yourself of the plan you and the suits devised. The men classified themselves as agents working for the government to protect society from bizarre incidents and threats. Your part is simple: wait here and when the monster shows up, the agents will take care of the rest allowing you to witness and write the article of your career.

The leaves peeking from the river banks shake and two claw-like branches grasp the railing separating the swamp. A knotted mass of branches and vines cloaked in mud and everything you’d find in a roof’s gutter, cautiously climbs over on to the footpath and reveals itself as the swamp creature. He’s more vigorous and intimidating in size than he was at the Precinct. Worms wriggle inside your belly as he strides across the road toward you.

“Thank you for helping me. Do you have it?” he asks.

“Err…” Is the only sound you make as you wait for the agents to pounce.

Bloggo leans in close and examines you. You’re too afraid to move or even flinch.

“Do you have the elixir?” He demands.

“Yes!” You blurt, afraid that any other answer would make you his lunch.

He cocks his head to the side while you wonder where the hell the agents are.

He grabs you by the throat and hoists you off the ground.

“I won’t eat you but I will tear your limbs out if you don’t tell me where it is.”

Ropes drop from the bridge and agents dressed in black from head to toe glide down both sides. Bang! A bullet collides with Bloggo’s arm and frees you from his grasp. Wood shrapnel hits you in the cheek as you fall to the ground.

He looks around at the swarm of armed agents closing in, then back at you. “You!” He snarls.

He raises his arm as if he’s about to swat a giant fly then BAMF! A net blasts and wraps him in a bundle. He throws his body to untangle himself. Some of the net snaps and untwines but it’s too late. The agents have tightened their perimeter and one prods him with an electric rod. He screams and falls to the road.

A black van screeches in creating a road block. The agent with grey streaks through his black hair steps out of the vehicle and saunters over. “Thank you for your help.”

“What took you so bloody long? He almost killed me!”

“We had it all under control. We just needed a little scare footage to show the media that that thing is a threat.”

A click of a gun silences him. You look to see the strange woman who propositioned you earlier holding a pistol to the back of the agent’s head.

“You shouldn’t have trusted these people,” she says to you. “Put your weapons down, now!”

The agents place their weapons on the ground. She holds out a small glass tube filled with a red liquid, a potion.

“Take this. Give it to him.” She gestures her head toward Bloggo.

You reach out to grab it. The agent suddenly bends forward and kicks his leg back with a blow to her stomach. She drops the tube and it rolls along the gutter. He lashes his hand back and knocks the gun from her grasp drawing his own pistol. He throws Lucy on the ground and zip ties her hands behind her back.

Bloggo struggles and bursts free with a mighty roar and grabs the nearest agent armed with the electric rod and launches him in the river. The head agent picks up the potion and places it in his breast pocket, then pulls you away from the action. Bloggo fights the remaining agents, shrugging off whizzing bullets. Lucy wriggles along the grass dodging harm.

“Hold this.” The agent hands you the potion from his pants pocket and runs to the car slamming the door behind him.

Where is he going? You tremble and creep backwards. Bloggo turns and stomps toward you. He towers over you, scowling, and snatches up the potion. He flicks the cap off and drinks from the tube. He falls to his knees in pain and his body shrinks to the size of an average man. The branches and vines twist and creak morphing into bones and human flesh.

He looks over at Lucy. “It worked!”

He looks… normal. Handsome too, besides the swamp slime that coats his naked body.

But suddenly, he clenches his heart. His bones creak and crack then explode into branches that pierce through his skin. You feel the agony of his screams. Then he looks you in the eyes and combusts into flames, his body collapsing into a fiery blaze.

The head agent calmly gets back out of the car and comes to stand beside you.

“Glad that worked. Congratulations. You’ve helped take down the savage creature and protect a lot of people. You did the right thing.”

“I swapped the potions. He would have killed me if I’d been holding it.”

You’re left not knowing how to feel or think.

He attempts to offer a smile and saunters away. “Good luck with your story.”

Did you actually help protect the people from a monster? Or did you help the monsters thwart an innocent and misunderstood creature?