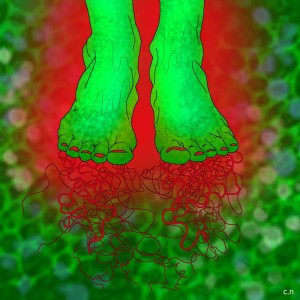 Under the Eleanor Schonell Bridge (River Side)

You stand beneath the shelter of the bridge by the riverside fidgeting with the elixir. Light dances under the bridge’s surface bouncing off the shimmering water. You gaze over the river praying Bloggo makes it.

The echoes of the fight as you ran plays on a loop in your mind: guns firing, crashes of tree branches, bullets bouncing off the chimes creating chaotic music, thunderous thumps, groans of men and roars of a beast. But the sound that has lasted what feels like hours is the most unsettling: silence.

Heavy non-rhythmic footsteps clutter toward you. You look down the walkway and there’s Bloggo. He’s hurt. Blood trickles down his vines painting a red dotted trail along the path. He staggers to his knees before you. The head of a harpoon is broken off between his ribs and shoulder blades, piercing his vulnerable heart.

You grab the harpoon head, and look away. You take a deep breath and yank it out. Bloggo clenches the ground roaring in agony.

He props himself up and lurches over the railing tumbling down the slope into the muddy swamp. Crouching to one knee, he plunges his hands into the earth. His branch-like fingers grow and writhe beneath the surface and his feet become roots buried in the soil. The delicate vines that entangle his insides wriggle and entwine his wounded heart. It glows red like a beacon. The bleeding stops and his heart mends.

Bloggo stands reformed and disappears in the darkness of the swamp hidden by shrubbery and shadows. The leaves rustle and shake toward you and he re-appears from the marsh holding a pale slender woman in his arms. She’s young and beautiful. A damp and what was possibly once a white summer dress clings to her figure and long, wavy red hair drapes over his arms. He gently cradles her against his torso with one arm and uses his other to help climb the slope. Reaching the top, he lays her in front of you, his hand supporting her head.

He opens his other hand and you pass him the elixir. He flicks the cap off the tube and pauses. “Thank you.”

You smile in return and watch him hold the tube to her mouth. He tilts her head back and pours the red liquid between her faded lips.

You stare in anticipation as moments pass and nothing happens. He holds her closer and shuts his eyes as if praying.

Her eyelids twitch. Suddenly, in a yearning gasp, her eyes snap open and her chest bucks up as her heart is awakened by a surge of energy. Light floods her body from the inside.

Her body relaxes into Bloggo’s arms and she looks at him with gentle blue eyes.

Her hand reaches up and grazes his rough cheek with her delicate fingers. Her smile dimples her cheeks.

“You look different. Did you shave?” She jokes.

Like a light switch, he smiles making his eyes sparkle. He embraces her into his chest. You feel a warmth of gratitude in your heart, proud to have helped. You vow to expose the truth and write the story of the misunderstood creature and the power of love.