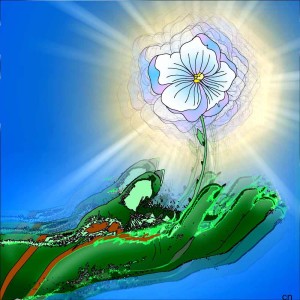 You cross the threshold of the cemetery’s iron gates gasping for a breath.

“Let’s split up from here, they’re gaining on us,” Bloggo suggests as you become aware that you are standing in the spookiest graveyard you’ve ever seen.

You nod. He holds out his hand, palm facing up. A leafy vine crawls up his arm and blossoms into an elegant flower with blue petals that fade to white.

“Eat this,” says Bloggo. You look at the flower like a curious child and pick it from his hand.

“Find Albert Ernest Humphrey. Go right at the fork and down the hill until you see the gravestone under the tree with the view of the river. It’s next to the white monument that looks more like a Greek garden feature. You’ll know it when you see it,” he says.

“It allows you to see what most can’t. I’ve a lot of friends here and Al is one of them. Find him and he will help you. The flower has properties that allows your brain to see energy fields of the deceased.”

“You mean ghosts?” you say, voice rising in a squeak.

“Careful, some of them are pesky. The flower will make you drowsy but stay awake. They’ll track me down before you so you should hold on to this. I’ll meet with you later; Al will tell you where.”

He hands you the elixir and jogs down the hill disappearing against the trees. You look at the flower thinking you’ve come this far and shove it in your mouth. It tastes the opposite of how it smells; bitter. As you reluctantly chew the powdery petals, its juices mix with your saliva making you feel lethargic. You remember what Bloggo said and slap yourself across the face.

You swallow the remains of the flower and instantly feel a sensation dispersed from the centre of your brain through your nervous system. You close your eyes and re-open them, gazing at the collection of tombstones. Lingering about them like a social club are transparent figures made of blue phosphorescent light. They look like holograms of people from different times projected on to a veil of smoke.

Your hear footsteps pacing toward you from the street; the agents!

You hastily move down the slope toward the right and a spirit pops up from the ground in front of you stealing a heartbeat. His slicked back hair curls up off the collar of his frock coat, that compliments his waistcoat.

You look behind you as the agents stop at the gates. The spirit of a woman wearing a nineteenth century Victorian dress strolls across the path between you and them sporting her matching parasol. The agents burst obliviously through her transparent figure, guns drawn.

South Brisbane Cemetery Lot 5B: Trust the gentlemanly ghost and follow him down the road left of the fork, and turn on to Lot 5B?

South Brisbane Cemetery Lot 11B: Ignore the strange ghost and run straight through him, turning right at the fork travelling to Albert in Lot 11B?