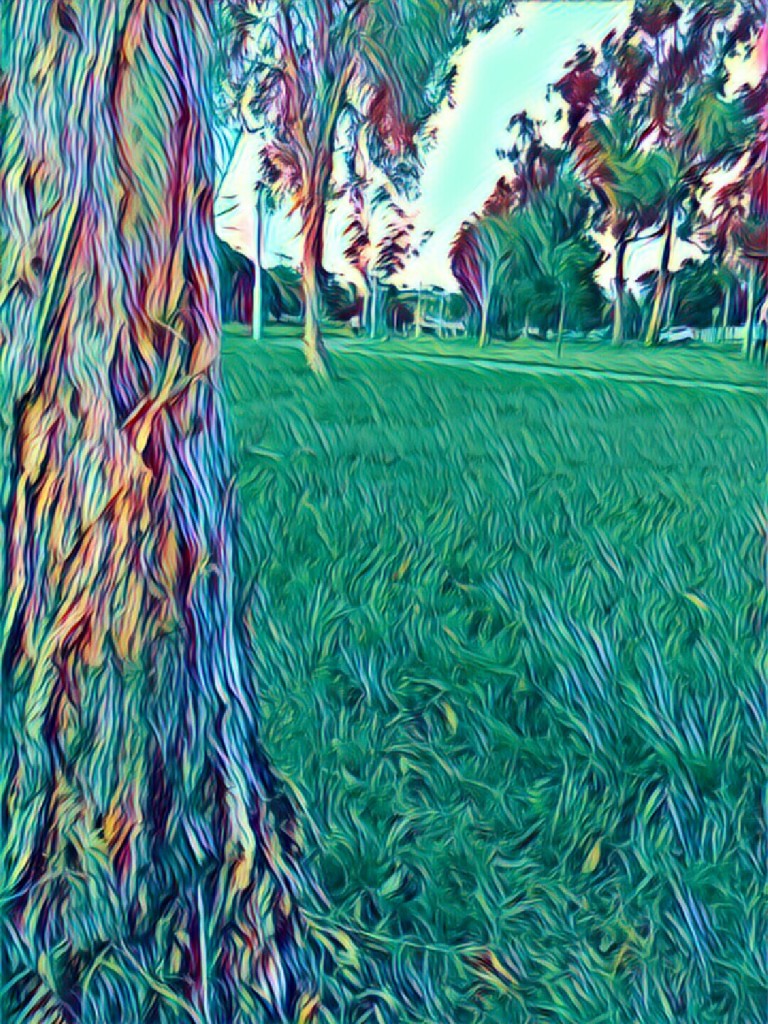 At the triangle of grass formed by the crisscrossing walkways, you slump alongside Midge. Mul awkwardly covers her head with her leafy arms. Gum catches up, tripping on foraged armfuls of Lomandra and loose strips of Paper Bark. He sits beside Mul.

Pinching and holding one end of a grass stalk on a stick as thick as Mul’s head, he wraps it around and around, making sure to coil and weave and tuck along the way. When the stalk is gone, he eases the ring of grass off the end and says, “It’s a hat.”

“It will be.” Gum rubs the paper bark with a small stone until it’s soft and smooth, then shaking debris from the bark, gently places it on Mul’s head. Sliding the ring over the bark as if it were a crown, Gum smiles. “Perfect.”

A cool breeze lifts from the creek and two Crested Pigeons alight from the railings of the footbridge to land in the grass beside you. Mul puts her finger to her lips and you make like fallen leaves.

“Will you stop following me?” The girl pigeon coos.

The boy pigeon leans forward, fans his tail feathers out wide, and spreads his wings a little. He bobs back and forth saying, “klooklooklook at me.”

“Seriously Beth,” he puffs. “Are you not impressed?”
“I’d be more impressed if you fix us something to eat,” she coos.

“Certainly, my sweet,” he says. The wind from his wings tickles the grass into a quiet rustle. “I shall return with a… SNAKE!”

You sit up with a start to find a Green Tree Snake is sliding toward you with its mouth open.

The female Crested Pigeon beats a blur into the air.

“I agree with her,” Gum shouts. “Playing musical statues when there’s a Snake nearby is not a good idea.”

The gleaming green snake stops directly in front of Mul before you can scatter. “Caahh yuuhh hep muue?”

The snake’s face contorts around the thick twig jamming its mouth open.

“About time,” Mul says, “Manners are so important.”

“What are you doing, Mul?” Midge shouts.

Midge and Gum start laughing, but you nod.

Shaking a little Mul gets in the snakes mouth, bends her knees and braces her arms against the roof. “Ready when you are.” You take a firm grip of the stick with two hands and nod. Mul pushes, you pull, and Mul disappears as the snake’s mouth slams shut.

The snake makes an “mmmm” sound, and opens its mouth, very quickly. “I’m ssssso ssssorry,” it says. Mul brushes herself off as she climbs out. “Thank you sssso much.”

“Can I return the favour?”

“Actually…We’re on our way to the big play area.”

“The one with the big yellow flower bessside the blue ssslide at the door of the red plassstic houssse,” the snake says.

“No, the big one at the end of the park with picnic benches and a tap.”

“I’m heading that way too. Hop on.” The snake tips her head and Mul climbs on. Midge and Gum are less keen, but you jump on behind Mul. The Viro lads join you and soon you’re skimming your way past the small play area and Illawarra flame trees saplings, toward Logan Road and the Wooden Bridge to Junction Street.

Follow the SE Freeway Bikeway toward Logan Road for 300-400ms 4/5 minutes walk to the wooden bridge that leads to Junction Street.