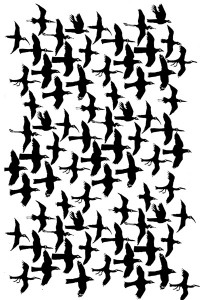 You arrive at the beach and look out at a most unexpected scene. On a normal Spring day you would be surrounded by swimmers larking in the water, tourists packed sunbathing on the grassy hill and ice cream vendors doing a roaring trade but not today. In front of you lies a deserted beach, the lifeguard tower toppled over and a rough cardboard sign in the middle of the water reading:

Do not attempt to have fun here.”

You see something else written below in different handwriting, you squint to make out the red words.

“The Dark Legion have been here, they have claimed this place as their own,” comes the Hero’s answer. He walks towards the shade hut in between the two beaches. Inside you find piles of feathers, scratch marks and abandoned swim towels. Whole picnics are laid out in front of you, left behind by families who fled the invasion, or worse.

The Hero picks up a donut, munching thoughtfully. “Somehow the Legion have claimed this area, we need to formulate a plan to get it back.”

You look around, nothing seems to be marked or specifically blocking anyone from the area, but the people, the usual buzz and excitement that surrounds the man-made beach is gone, replaced by pure silence and the munching of the Hero. “I think Avalokiteshvara might have been on the right track, they’ve sucked the happiness and joy from the place, there’s a vibe that seems to have scared everyone off.” Seriously, the place is empty.

The Hero shakes his head morosely. “This makes me very sad,” he says, biting into a second donut to ease his pain.

“Well I’m not scared,” you cry, “I’m not frightened of any birds and their beaks!” With that you walk to the edge of the boardwalk, stripping of your clothing and shoes and readying yourself to dive right on in.

“No, don’t!” cries the Hero, but it’s too late. Just as you dip your toe in the chlorinated pool for a quick temperature test, the sky darkens. At first you think it’s a sudden rainstorm, but when you look up your realise it’s the wings of thousands of birds blocking the sunlight. They are hovering, seemingly waiting, and all eyes are on you.

“What are they doing?” you ask the Hero, one foot still poised, hovering above the water.

“I don’t know, but I think they’re some kind of alarm system. They…uh oh,” the Hero grabs you away from the water, “Run!”

As the two of you start to run away, the birds unleash a powerful rain of sticky white poop, pellets pelting the ground all around you.

You find it hard to see and you fall into the water, weighed under as a layer of sticky, smelly bird dung covers you. You hear laughter, roaring laughter and look up to see the birds releasing this ungodly sound, the pent-up joy they have stolen from the people of Brisbane filling the air around you, though now it makes the most hideous sound imaginable.

As the birds’ poo dries on you it stiffens and you and the Hero are left unmoving statues, placed in the cool turquoise water either side of the sign, a trophy for the Dark Legion to boast about and a warning sign for others.