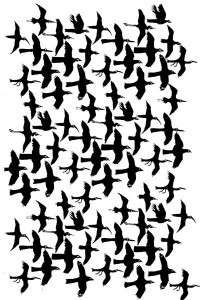 As you walk onto the green expanse of grass you realise that the Dark Legion hasn’t reached here yet. People still picnic, children walk down to the rocky inlet of the river and attempt to skip stones. You feel yourself sigh with relief, the tension draining out of your body.

You feel your muscles zip right back up, though, as the Hero says, “There he is, coming out for lunch, right on time. He was always obsessive about timing.”

The Hero points to a slight, fair young man walking towards you across the grass. He looks almost waifish, like he’s about to be picked up and blown away on the river breeze. He seems to withdraw from the sun, wrapping a dark scarf around his neck and wearing giant polarized sunglasses. As he draws nearer, you see that he’s an exact replica of the Hero standing next to you, if only the Hero had been sucked of all his muscle and bouncy sense of joy and life.

The Hero’s brother doesn’t seem to be at all surprised to see you. He walks up, standing beside the pair of you, nearly disappearing in the Hero’s mammoth shadow. “Dave,” he greets the Hero.
The Hero nods. “James.”

“That’s my name,” replies the Hero. You realise you never even asked him.

“And this is?” the slight man looks you up and down, you do your best to puff out your chest and look menacing, for the first time in this whole ordeal facing up to an enemy more your own size.

“The best Apprentice a Hero could have,” the Hero replies, making you blush.

James laughs. “Oh Heroes and Apprentices. I gave up all that nonsense years ago. I prefer to go by Super-Villain now.”

The Hero is quiet and you’re not sure what the plan is from here, but you’re sure that standing out here in the open with the Leader of the Dark Legion is only asking for trouble.

“We’ve come here to stop you and your dark ways from destroying all the beautiful things about our city,” you say.

You’re going to protest, but remember that the man’s still in charge of hundreds of deadly birds.

Next to you, The Hero sighs noisily and sits down.

“You’re right,” he says, “we’re beat. I couldn’t even figure out it was you behind the Dark Legion, I certainly don’t have the brains to beat you now, even with my Apprentice.”

You can’t believe the Hero’s giving up so easily, after coming all this way. You’re about to pipe up when he lays a giant hand over your mouth, making it difficult to breathe. You watch James wearily, his head thrown back in laughter.

“Oh, but brother,” he cries, “It was such fun watching you run around, acting out your little Hero charade. You thought you were so clever with rhyme-speaking oracles and fancy gadgets!”

Still unable to speak, you watch on. What is the Hero’s plan here?

“Tell me, James, the one thing I’ve never been able to figure out. How do you control all of those birds?” You see the old glint return to the Hero’s eye as he turns to you and winks ever so slightly.

“Well, it’s easy,” starts James, “I have all the birds connected to my GPS controller, which is programmed into my watch here –”

The Hero picks you up and launches you at his brother, who you crash tackle to the ground easily but without much grace. The Hero quickly snaps the watch from his brother’s wrist, bounding with surprising agility up the cement stairs.

He presses buttons furiously while James scrappily fights you off him. “No!” he cries, “No, don’t touch it; you don’t know what you’re doing! You’re going to ruin everything!”

Suddenly the watch emits a piercing shriek, shrill like a bird but unearthly. James laughs again now. “The defence signal! The birds are programmed to attack whoever has the watch when the signal is triggered by its removal from its owner! You’ve really done yourself in now, you fool!”

“Oh my!” cries the Hero, “Oh whatever shall I do?!” He runs towards you dramatically, as though fleeing the oncoming birds whose cries are already starting to fill the air. You have just enough time to snatch the watch from his hand and hastily re-fasten it onto James’ wrist while the Hero holds him down before they arrive.

The angry flock, made up of huge ibis and crows and darting sparrows and starlings hover above you. The warning signal continues to blare from the watch on James’ wrist and seems to make the birds more enraged. James fiddles with the buttons, cursing, until the watch emits one final shriek and the birds dive as one, lifting him up by the clothes and off the ground.

“No!” he cries, “I am your master! Put me down your imbecile creatures!” His kicks and screams do nothing to worry the birds which fly him higher and higher away over the river.

The Hero laughs and looks pleased with himself. “Not all the Hero genes were passed down through our family, but the one for showing off certainly was, and in good measure! I knew if I could just get him to show me how he worked the birds I could gain control.”

“That was pretty brainy in itself,” you say, catching your breath after the ordeal.

“Thanks, partner. I guess it was.” He turns and wraps you in a bone-crushing hug. “I’d best go after him. Mum wouldn’t be pleased if I let him get too pecked by his own creations. I think he’s in for a solid grounding when I take him home though!” He laughs contentedly.

“That’s very noble of you. I can’t think of a truer heroic act than that,” you say, and you mean it.

“Well, hooroo then!” the Hero says, wiping a sneaky tear from his eye.

“If you’re ever in need of an Apprentice…” you trail off.

“I’ll give you a call,” the Hero finishes your sentence.

He walks away up the footpath, towards the group of old fig trees where the birds appear to have nested with his brother.

You walk slowly back through South Bank, watching as the colour and light returns magically to each park and pool. All the while, even though everything is back to ‘normal’, you still can’t quite shake the feeling that the ibis are following you.