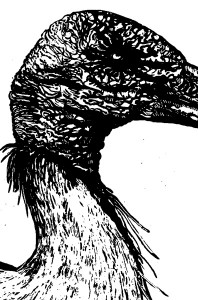 You walk back towards the river, and notice the small boxes that you might otherwise have walked right past. Inside, small figures press their faces up against the glass. You can hear a tiny, tinny sound coming from inside.

“They are speaking to us,” the Hero furrows his brow as he leans in closer, trying to get a better look.

You read the plaque on the pillar. “There’s not meant to be that many people inside those boxes.”

You look back to see the box even more full of tiny people, new ones popping into emergence with every passing minute.

The Hero pulls out a small brass funnel and fits it to his ear, then hands you the earpiece gesturing towards the box, then turns to autograph a notebook for the tourist. You place your ear carefully against the glass. At first you hear a babble of voices then one, the self-appointed group leader, breaks through.

“Stories are information,” says the man, “and the Dark Legion can’t afford information about their goings-on to spread. They’ve imprisoned us here so that they can finish their evil business before anyone finds out!”

“Alright,” you say to the story-tellers, “don’t worry. We’re going to get you out.”

You turn to the Hero, who is still talking to the tourist. “But why?” you hear the tourist ask.

“Well, because I’m a Hero,” comes the Hero’s answer.

“But why?” the tourist repeats.

“Because I am. Look at me.” You can see him becoming more and more confused, flexing his biceps and glinting his teeth to no obvious effect on the tourist…you find it slightly amusing and feel a sense of a kindred spirit in the tourist who also has trouble recognising the heroicness of the Hero.

You interrupt before the Hero develops an identity complex, pulling him away from the confused traveller. “We have to get them out of there as soon as we can.”

“It’s time for a rescue!” says the Hero nodding. He looks around, before picking up a stray stick from the garden. He cups his hands to his mouth and leans close to the box. “Stand back!” he calls to the shrunken people.

As he raises the stick you shut your eyes, flinching when you expect to hear the sound of breaking glass, the images of tiny impaled story-tellers playing on your mind almost too much to bear. The glass doesn’t break, however, and you open your eyes to see the tourist now standing between the Hero and the box, one finger up in the air. He has a question.

You lose it. “Because the Dark Legion are here!” you shout. “Because they’re greedy and mean and…and…evil!” Even as you are talking you notice the change in the tourist’s expression. He transitions from vaguely quizzical to smug, his eyes hardening and glinting cold.

You notice the small badge of an ibis pinned to his collar. On a tourist this would seem like a quaint souvenir, but on this man…

“He’s part of the Dark Legion!” you yell.

“Run!” shouts the Hero and drags you away, but it is too late. You feel yourself shrinking, condensing down smaller and smaller until you are two tiny figures, covering no ground in your efforts to escape the now giant feet of the Dark Legion spy. He cackles, picking you up by the feet and plopping you into the box crowded with other story-tellers.

“Have fun telling your stories now!” he laughs, then bends down to take one last sadistic picture of the two of you in the box, pressing your hands to the glass and shouting at passers-by, none of whom can hear you.