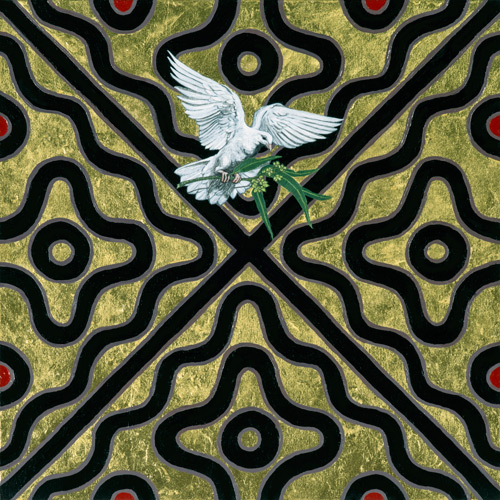 To hear about the work from the artist, select the ‘Audio’ button below. Select the ‘Stop’ button with the musical note to stop the recording.

For the location of the next artwork in the tour by Archie Moore, please see the directions at the bottom of this page.

Ryan Presley was born in 1987 in Alice Springs, Northern Territory.  Presley currently lives and works in Brisbane. His art practice is a reflection of his locale which he audits and critiques to mount a larger inquiry that interrogates the articulations of power.

Themesong is a series of painted and gilded works that is composed of twelve separate square panels. The panels are made from a native Australian Hoop Pine ply. The detail of the panel shown, Girt by Seas, depicts a flapping dove carrying a eucalypt branch. This series of work was conceived as a play on reverence and sought to depict contradictory elements that come into play when domination is an overarching ideal.

My name is Ryan Presley, and my family are Marri Ngarr from Moyle river country. The name of the work is called Themesong, and this image is called Girt By Seas. My family’s a mix, my mum’s Danish and Swedish background, and my dad’s Aboriginal.

Living in Alice Springs my family were from Moyle river area which is around Port Keats in top end NT. I like it up there, but it’s hard to get to, like, it’s far away and it’s remote, like quote on quote remote. It’s amazing, like, there’s these massive termite mounds, taller than people, there’s like vast flood plains, unique palm trees and the water, like going fishing up there and the water’s like green and, but crystal clear, and you can see the barramundi like, swimming past the boat. It’s crazy.

The work is from a series called Themesong. And there’s two parts to the series. There’s a first set of six which is For We Are Young And Free, and the second set is called Our Home Is Girt By Sea. It’s working with musical ideas, musical theory. I was referencing a theory from Jacques Attali, who was an economist but wrote a book about philosophy of music. And he’s talking about music being structured in western culture to be the voice of power. So I was taking that and looking at songs that group people together, like nationalism, religion, these sorts of things that give masses of people a connection where there otherwise wouldn’t be one.

So with the two sets that make up a whole work I’ve encoded bits of melody into the image through the pattern making, so the pattern making is based on geometric patterns that are created from vibration. So different vibrations would create different geometric patterns. But also mixed with ideas of what could be assumed is like tribal patterns or Aboriginal cultural patterns.

That work specifically, the dove, is paired with a burning junk boat. So I wanted to mix in ideas of religion as well because I was growing up, my mum’s family, through adoption had actually become primarily Roman Catholic. So I grew up catholic in Alice Springs, and I was thinking what a interesting idea to look into, or interesting scenario that the Catholic Church is in the middle of the desert in Australia, and originating from Italy, Europe, you know, what is it doing here? So that history of religious expansion, paired with colonial expansion, and expansion through conquest and how these ideas tie in together. So I was blending also that iconographic tradition into this work. The dove with the eucalyptus leaf, the eucalyptus branch instead of the olive branch.

I’m not Christian myself, or religious, but I know that it’s had an important role in western culture. I’m thinking about ideas of false hope, I suppose and deception, a group can promote utilitarian ideals or generosity or compassion but it’s sort of a façade. Obviously for one example there’s the use of detention centres in offshore islands like Nauru and they’re indefinite so there’s this hope for these people. There’s a reference to that, that false hope, and such a rich society can be so exclusive at times, and like violently exclusive that they intercept these sorts of people and will use it as like a political game.

To continue the tour and view the next artwork by Archie Moore, select the ‘Map’ button on the bottom right and walk to the next artwork at Site 6 – Starlines. As you get within 50m of the artwork the app will automatically unlock the next page. Keep walking until you are standing over the red pin.