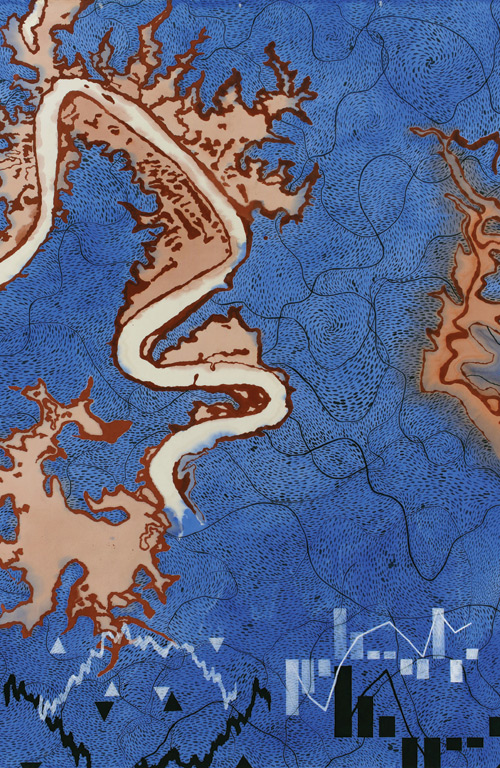 To view the next artwork by Judy Watson, enter the foyer of Brisbane City Hall, follow the hallway on your right and take the elevator to the third floor. The artwork, water dragon, will be on your right.

To hear about the work from the artist, select the ‘Audio’ button below. Select the ‘Stop’ button with the musical note to stop the recording. For the location of the next artwork in the tour by Hannah Brontë, please see the directions at the bottom of this page.

Judy Watson was born in Mundubbera, Queensland and belongs to the Waanyi people. She works across diverse mediums to explore ancestral, political and environment aspects of her Aboriginal heritage. In 1990, she visited her traditional lands during the first of many journeys and the spirited presence of these lands has been embodied in her work since. Through printmaking, painting and sculptural forms she draws rich inspiration from the homelands of her grandmother and great-grandmother’s Country, Waanyi, North West Queensland.

This work  was made in 2011 in Watson’s Brisbane studio in Brereton Street, near Montague Road, South Brisbane. Just a few months earlier, the 2011 floods licked at contemporary history along the edges of the city, coalescing with the Aboriginal history at Kurilpa, place of the water rat.  Montague Road was formerly an Aboriginal walking track with lagoons along its edges and the Brisbane River, Maiwar, running beside it.

Magil, the eastern water dragon could be the creature dancing across the space via the red ochre mapped images of the Brisbane River in flood. The white snake like form is the river line at Kurilpa. The water dragon is a shape shifter for other creation ancestors such as the rainbow serpent or in a Brisbane context, the freshwater eel. The rich brown flood waters merge with the wash of red ochre and blood, fixing time and place with its staining and pooling of colour.

The white and black rectangles, triangles and line motifs at the bottom of the canvas are derived from the financial reports in the newspapers on 13 January 2011 when the floodwaters peaked.  The images are inverted, facing off towards each other, in lieu of a natural disaster. It is a timely reminder that many of us live and work within the floodplains of Maiwar.

The small black waving flecks within the dreamlike blue background are indicative of the swirling flood waters, trapped within the net-like lines that lace across the canvas. Water has a memory, it follows the topography of Country, connecting and submerging us within its wake.

My name is Judy Watson, my Aboriginal mob are from Waanyi language group in North West Queensland, and this work is water dragon.

My mob is actually through my mother’s side of the family, matrilineal side of the family. Our family are mostly in Mount Isa and we used to go and visit them, but I wanted to know more than that and that’s when I started delving in.

There’s been many visits to country now, but the first one was really important. It was touching and connecting with ancestral land. And I think for anybody, not just Aboriginal people but anybody from other places to go back to places where your forbears and your ancestors are from, it’s a very moving and a very touching thing to experience. And I’d actually been back to Lawn Hill Gorge when I was younger, and I knew that there were places there, but I just didn’t know where they were. Like Aboriginal sites, and it wasn’t until I went with my uncle who’s, who was an Aboriginal ranger at that stage, that he showed me that there were places both rock art sites and burial places and mittens of muscle shells etcetera. So it was really important to go back and also hear my grandmother’s stories about growing up on stations and living on bush foods and being shown those bush foods.

What I’m interested in now is also that cultural retrieval of memories of what I didn’t know was there. For example Archerfield aerodrome, which is not far from where I grew up, I saw at the anthropology museum, at the University of Queensland, a shield which was found ten inches under the ground. And so it’s all that stories, almost like an intravenous history, that I wasn’t aware of and that’s what I want to know more about.

Okay, water dragon was made in the studio in Brereton Street where I’m speaking to you from now. And that time in 2011, earlier in the year, the Brisbane floods had licked very, very close to the doorway. I was interested in the way that those flood lines had sort of merge, and sort of collected the history of those earlier Aboriginal histories, because Montague Road, which is just outside, was a Aboriginal walking path. There were lagoons along the edges here and Maiwar, you know the Brisbane River, running beside it. And so I always think that wherever I go to a place I want to learn the earliest history first, and then build upon those layers, and then know what the contemporary history is.

So I looked at geospatial maps of the Brisbane River in flood, and used those to then trace onto the canvas. And as I looked at those flood lines, and painted them in a red ochre, it looked like a mythical creature, was almost, you know sort of a water dragon sort of moving across the space. Which could almost be like a sort of a Chinese dragon or snake forms, you know sort of emanate and skip cultures. And in fact the water dragon, the eastern water dragon is magil, and an ancestral creation figure in Brisbane is actually the eel, the fresh water eel. And I learnt when I was doing another project that the juvenile eels are actually rainbow coloured. So that sort of ties in with that whole story of the rainbow serpent being an ancestral creature who creates the creeks and rivers and moves through, disgorging and moving country in its wake.

I think that the Brisbane River and other places, there’s something about water, it has a memory, it follows the topography of country, but it also has this latent power, and in flood it just moves across, and ignores, urban development. Within that work too, at the bottom, there are triangular shapes and lines and they are motifs from the financial reports on the day of the flood. And so I’ve got them facing off against each other, because I think that’s just an interesting reading with every natural disaster comes, you know, sort of whatever is going on in the finance market.

It becomes a language and a dance when making a work. And sometimes during the creation of the work it informs you which direction to go in, in the same way that as water runs in a trickle down a certain path, it sometimes leads me and focuses me in a different direction.

To continue the tour and view the next artwork by Hannah Brontë, make your way to King George Square and to the entrance of the King George Square Carpark on Adelaide Street. Enter the carpark via the pedestrian walk on the right and follow the Vibrant Laneways signs to the right. Then, when safe, cross the carpark on your left to the vibrant spray-painted walls where the artworks reside.