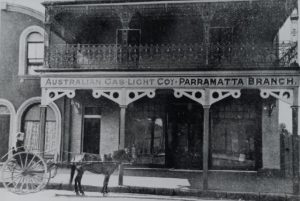 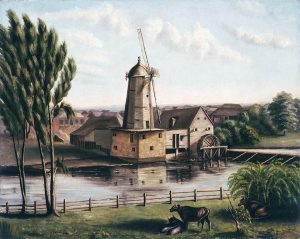 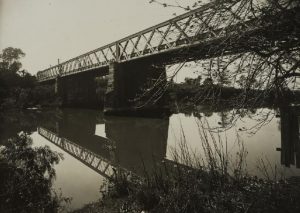 In 1828 George Howell and his son ‘George Jnr,’ began work on what was to become one of the most distinctive landmarks for visitors coming to Parramatta by river. Howell, an ex-convict settled in Richmond, saw the need for a mill to grind the growing number of crops in the Parramatta region. At this time, Parramatta lacked a proper mill close to town and Howell’s mill would be larger than any previously built in the area being 100 feet tall with six separate floors. Situated on the southern side of the Gaswork’s Bridge the site was chosen to ensure there was a continuous flow of water for the grinding. To accomplish this the Howell’s also needed to construct a dam across the river.

This started their public battle with John Raine who lived across the river. He was concerned the dam would bring trespassers, so Raine began to sabotage this project by digging up the dam on his side of the river. The Howell’s next-door neighbour, John Macarthur, supported them throughout the battle, ruling as magistrate when the case ended up in local court. After successfully winning the dispute their trouble did not end. Ten years later two fatalities occurred in the mill one of which saw the death of ‘George Jnr’. Only a year later George Snr died and the mill was passed on to his son Thomas and was managed by his wife Elizabeth until her death in 1866.