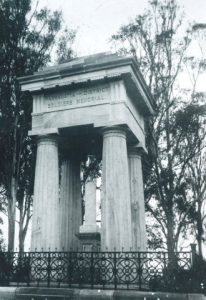 The memorial commemorates the 100 Lancers, including many from the Parramatta Region, who went to England and trained in Aldershot for six months at their own expense. Anti-British sentiment was popular in Australia during this time and so there was opposition to this trip by the Australian Government. Further opposition and attempts at stopping the troops were made when they decided to land at Cape Town on their way back to Australia to fight in the Second Boer War. In Parramatta, however, there was much support and the troops were promised a memorial in their memory. The memorial was built in 1904. This is what you see here today.