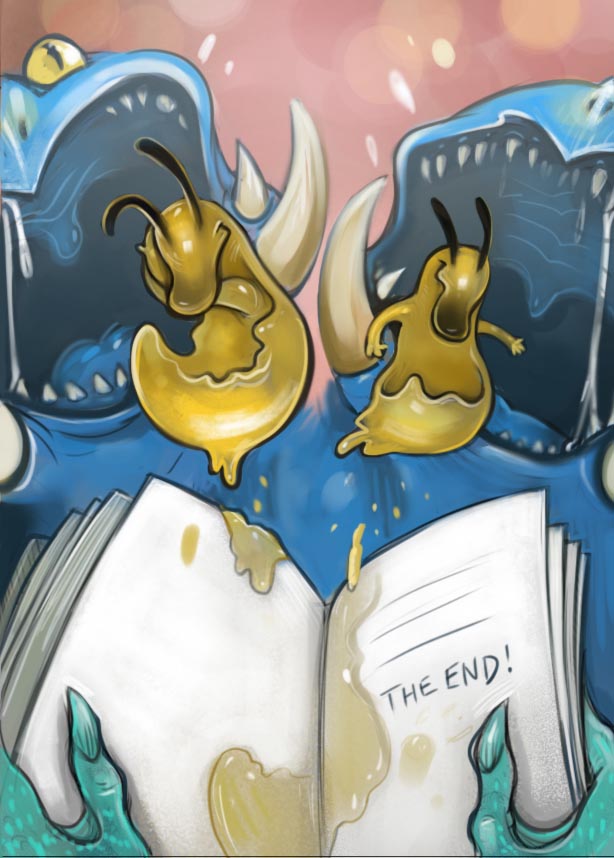 You arrive in Francis Street, home to Adelaide’s City Library, with green, yellow and pink paper planes flying above its entrance. The sign at the street corner says that City Library is ‘a place of possibilities’ – claws-crossed that’s true.

You pace up and down, passing the glass doors of the Library on one side and wrought iron gates on the other, as you begin to read ‘The Three Little Pigs’ out loud.

You’ve never heard of pigs building houses before. It seems like an unusual thing for them to do. And who builds a house of straw, or sticks? It sounds like those swine were asking for trouble. They obviously hadn’t heard of titanium alloy…

Gradually a crowd builds around you, assuming you’re some sort of story time session.

Just as you get to the interesting bit about the house of bricks – a far worthier construction material – a librarian storms out and gets angry at you for causing ‘a disturbance’.

As the crowd disperses you can’t help notice the contrast of the blue, Narl-like murals pressed against the neutral render of the wall just to the right of the Library’s glass doors. It’s not until you see the enormous picnic basket beside them that you realise they’re not murals at all…

“Make him finish the story, Shorty!” orders the taller one as he peels himself from the wall, his bulging yellow eyes shining against his rubbery blue skin.

You do as you’re told, wracking your brain about how to get yourself out of this mess as you read closer to the Big Bad Wolf huffing himself to exhaustion. You turn the last page of the book with a shuddering breath… and the Moodlings tumble out!

Clearly they were comatosed by your reading of the story, but before they hit the pavement, the Narl unhinge their massive jaws and lunge forward, catching them in their cavernous mouths and gobbling them whole.

You barely have a moment to process this sudden turn of events before the Narl creak open the lid of their picnic basket to reveal what look like hundreds of fairy tale stories.

“Here you go, Captain!” says Boss. “All the books you need to read us for missing your curfew!”

“And when you finish them all,” adds Shorty, “you can start over!”

Clearly, you’ve run out of miracles. It is time to accept your –

You watch in amazement as Boss starts to run in circles like a rabid wart beast and Shorty flounders on the pavement like a flapper fish.

When you see the Moodling-shaped bulges jerking from the Narls’ tummies, you realise the Moodlings have awoken and taken over their bodies, from the inside. The Narls’ bulging yellow eyes look like they might explode.

You decide a hasty exit is in order and retreat towards your faithful ship with a spring in your step.

“We’ll get you for this, Captain!” yells Boss, smiling and waving.

“If it’s the last thing we do!” cries Shorty, blowing you a kiss.

You turn to wave and think for a moment that you might miss the Moodlings, but by the time you turn back, you think better of it…

Congratulations! You made it back to the Never Galaxy intact! Don’t forget to upload a pic of you on your adventure to Facebook, Instagram or Twitter with the hashtags #StoryCity #Moodling

This is the end of your adventure but you can head back to the starting point to explore a different story path, or you can try the other Story City: Adelaide adventure, The Adelaide Time Travel Caper.