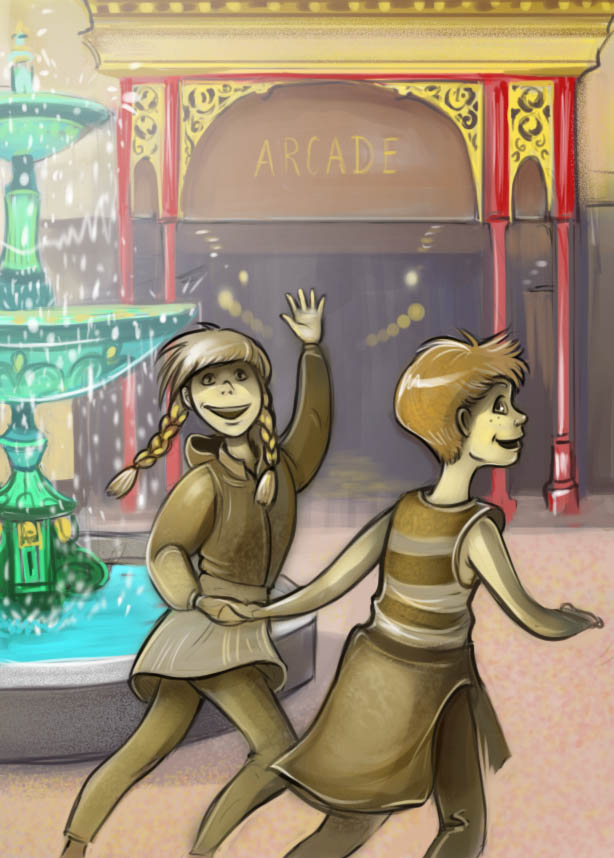 When you reach the imposing façade of Adelaide Arcade you instantly notice the Narl – Shorty and Boss – sitting on the edge of the cascading cast iron fountain and working their way through a pile of toasted cheese sandwiches, flavoured popcorn and yellow gerberas.

You step back into the crowd and pretend to busy yourself admiring the Arcade’s 1885 Italianate revival style, all two million bricks of it with its gilded wrought iron lattice-work and scalloped green-domed roof.

The chief ‘ghost’ of the Arcade, Frank, is actually a Gizlet, a stone-faced lifeform from the Never Galaxy.

Frank’s propensity for fun has, more-often-than-not, led you into trouble, but with one Moodling still to find, and limited options, you decide he’s worth a try…

“Frank,” you whisper up to him.

“Captain!” he yells down.

“Shhhhhh!” you motion to the Narl and Frank nods. “Have you seen a Moodling?”

“There’s one on your shoulder!” he replies.

Frank shakes his head and a pigeon lands on his healthy head of hair. He tries to shake it off but can’t tilt his head up. Frank gives an angry huff and the pigeon, for all intents and purposes, seems to fall asleep.

The Moodling on your shoulder wiggles, then starts thrashing about so violently that you struggle to hold him. You’re so distracted that you almost miss the pigeon turning into a puddle of goo that rolls down Frank’s nose.

Frank sneezes violently and what you now realise is that the second Moodling, is floating towards you in what appears to be a huge snot bubble.

Just as the bubble containing the sleeping alien is almost within reach, a gust of wind blows it in the direction of an open-mouthed Narl. Fearing the Moodling may become a Narl-snack, you swiftly unleash your two metre-long tongue and pop the bubble. Too bad you didn’t anticipate that the wet slap of the sleeping Moodling hitting the pavement would attract the Narl’s attention.

You hesitate a second too long and Shorty and Boss rear over you, baring their popcorn-encrusted teeth.

“What do you think, Shorty?” asks Boss. “Down the moon jelly mines?”

As they bundle you up and carry you down the Mall you notice from the corner of your eye two shimmering trails leading to a pair of small humans. The Moodlings, smiling and waving.

“Thanks for a terrific day, Captain! We had fun!” one giggles.

“So much fun,” laughs the other, “that we’ve decided to take over your business!”

All you can do is shake an angry fist at them as they skip along beside you, all the way to the Narl prison ship, where they blow you kisses and wish you ‘Bon Voyage’…

Ouch! Bad Luck! This is the end of your adventure but you can head back to the starting point to explore a different story path, or you can try the other Story City: Adelaide adventure, The Adelaide Time Travel Caper.