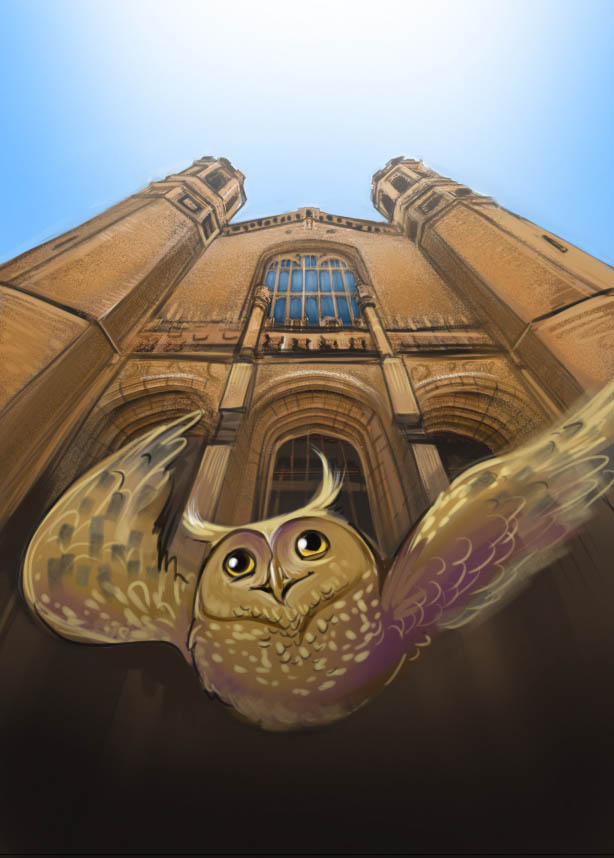 Time is of the essence, but standing in front of Bonython Hall brings back such fond memories.

In the years following the Hall’s opening in 1936, you paid frequent visits here, but never through its three grand medieval front entrances, and never on official business. You were more inclined to slip in through a secret underground tunnel when the Hall was empty.

The intentionally sloping floor of Bonython Hall, designed to discourage frivolous activity such as dancing, provided the perfect surface for one of your more creative pursuits. Moon-walking was first popularised on the numerous moons of the Never Galaxy and is best practiced on a pitched surface.

If it weren’t for the hours you spent honing your craft in the great Hall, you’d never have become the Never Galaxy Moon-walking Champion.

With the swarms of back-packed humans all tapping at their portable communication devices, you feel comfortable resurrecting your moon-walking skills across the pavement in front of Bonython Hall, towards the Goodman Lawns.

The lethargic humans lazing there may not bat an eyelid, but the Moodling on your shoulder begins to wiggle uncontrollably and one of the oversized owls, high on the Hall’s left turret, begins to hoot with laughter. When it falls from its perch, barely able to flap its wings between hoots, you notice its shimmering trail in the air.

You manage to position yourself to catch it, a muddle of heaving feathers, and pop it on your other shoulder where it quickly changes into its natural form, wiggling with its mate in an apparent attack of Moodling giggles.

A back-packed human smiles and you see a hint of gills beneath her collar. When you take a moment to reflect on the Intergalactic Exchange Program you negotiated with a notable University Professor, you find you’ve paused a moment too long.

“Freeze, Captain!” you hear Boss roar as the Narl career towards you across North Terrace, leaving a trail of popcorn in their wake.

By the time you deliberate which way to run, they’re standing over you, fangs poised.

Gallons of slippery, brown goo squirts from either side of your head. That’s new…

You glance sidelong and realise it’s the Moodlings to the rescue! The slime coats the Narl from head to foot, oozing over their bellies and down their rubbery legs. As Boss tries to rub the goo from his eyes he takes out Shorty with his elbow and both tumble to the ground with a squelch.

“Captain!” shouts Boss, slipping and sliding as you casually walk the Moodlings west past the Goodman Lawns and the enormous canopy of a century-old Moreton Bay Fig tree.

At this safe distance, you turn and tip your hat at the Narl.

“We’ll get you!” howls Shorty, writhing about, but you’re confident that before long, you and the Moodlings will be en route to the Never Galaxy aboard your faithful ship, laden with contented passengers.

Tomorrow will bring a new mix of wealthy alien tourists, and a veritable galaxy of possibilities.

Congratulations! You made it back to the Never Galaxy intact! Don’t forget to upload a pic of you on your adventure to Facebook, Instagram or Twitter with the hashtags #StoryCity #Moodling

This is the end of your adventure but you can head back to the starting point to explore a different story path, or you can try the other Story City: Adelaide adventure, The Adelaide Time Travel Caper.