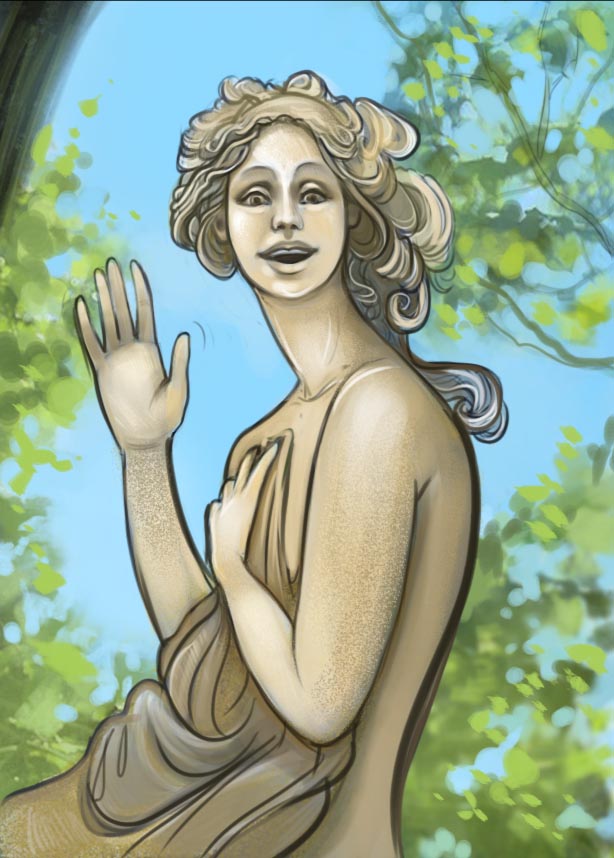 Ah, Canova’s Venus, a copy of the work of Italian sculptor Antonio Canova. You’re relieved to see Adelaide’s first public artwork still standing and looking as she did when unveiled back in 1892. Moodlings are renowned mischief-makers and you’d feared that by the time you reached her she’d be no more than a mound of crumbling marble.

You recall the controversy that surrounded the placing of a nude figure in a public space. It led to Venus being positioned near the Government House guardhouse for her safety, but that didn’t stop the humans from skulking about in the dead of night to cover her state of undress. Considering what an insult it is to wear clothes in the Never Galaxy, you found the whole episode puzzling.

But you’re not here for a trip down memory lane. You’re here for the Moodlings!

You look around but there’s no sign. To be fair, the tourist who reported seeing them here had spent the day sampling thirty-six varieties of caffeinated beverage, leaving her literally bouncing off the walls of your ship…

You hear your name and spin around.

You look up and find Venus smiling down at you, waving. You instinctively retract your head into your body, and when you cautiously ease it back out, she’s bending down towards you.

“Captain!” she whispers, “I’ve always wanted to speak to you, and thanks to those lovely Moodlings, I can! I don’t have long, just enough time to pass on a very important message.”

Venus holds out a stone-coloured hand to you, but as you inch close enough to take it, she honks your nose.

“You’re it!” She squeals with delight, the ringlets in her hair bobbing about excitedly.

She resumes her pose and freezes like, well, a statue.

You prowl around her, coming to grips with the fact that Moodlings not only have the power to change shape, but to bring inanimate statues to life! They’re more trouble than you ever imagined.

It’s then you notice a small marble box sitting on the plinth behind Venus that’s never been there before. As you tentatively touch it, the lid bursts open.

Two Moodlings in their natural form, looking like bloated Earth slugs, leap forth and bounce around like a double-headed jack-in-a-box.

“Can’t catch meeeeeeeee!” one squeals as it springs from the box and slides west through the Prince Henry Gardens and down King William Street, leaving nothing but a slippery slug trail.

“Gotcha!” you say as you grab it, but its brown, gelatinous body slides through your fingers. You lose sight of it for a moment but soon see a small human skipping east up North Terrace on the footpath behind the Gardens, leaving a shimmering trail of footprints.

Robert Burns Statue: Take a gamble that the shimmering trail of footprints heading east up North Terrace to the Robert Burns statue in front of the State Library is a Moodling? If Moodlings are enlivening statues, a chance to meet the Scottish wordsmith might be too good to refuse.