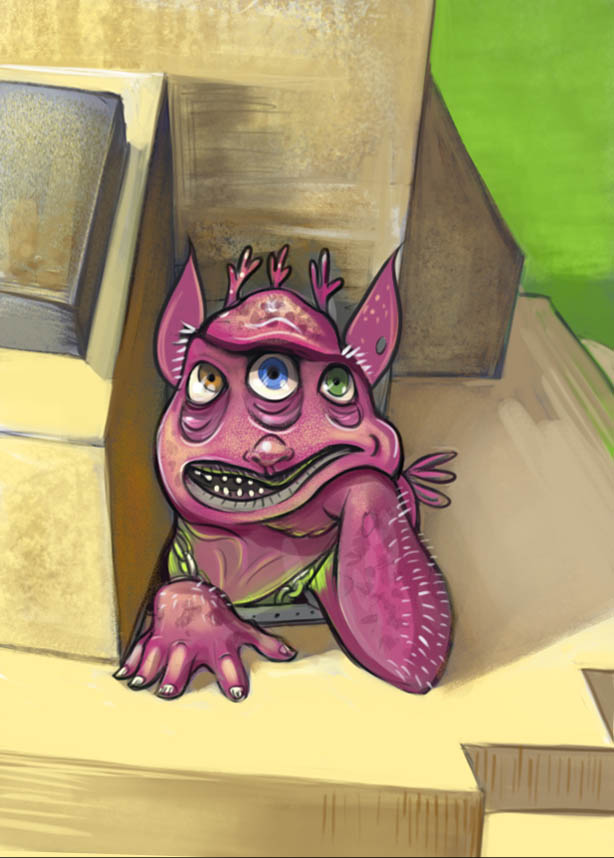 The slippery slug trail that brought you here has all but disappeared. You look around the red brick perimeter of the garden of remembrance for South Australia’s pioneering women, and wonder what form the Moodling has taken.

A swaying palm tree? A light post? A park bench?

“Coming, ready or not!” you shout, pretending to get into the spirit of a game of Hide and Seek.

You casually walk up the red brick path to the steps leading to the Pioneer Women’s Memorial, carved from a three-tonne block of limestone. You recall the time you tried to stuff it up the slipstream to sell on the Never Galaxy black market; you were so young and naïve.

You’ve since found its base extremely useful for storing Earth trinkets and collectables… The idea was inspired by the humans who sealed a time capsule in the Memorial containing plans for the sculpture and messages for the women of the future.

Surely they wouldn’t mind sharing the space until its planned opening in 2036?

You walk up to Astronomer George Dodwell’s Sundial on the north side of the Memorial’s base and press your thumb-print on the current month.

Moments later, you hear scampering and the unlatching of bolts.

On the south side of the sculpture a metal cast book inscribed ‘The Hours Vanish Yet Are They Recorded’ slams shut and creaks to the left. Bob, a three-eyed Never Galaxy Sortmaster and your Head of Acquisitions, pops his head out through the secret hatch below.

“Captain! How can I help you today?”

“Time? Captain, are you sure…”

Bob blinks nervously then disappears. When he returns, he hands over the blaster, then pulls the book back into place and hastily latches the bolts.

You set the blaster to ‘Extreme’ then release the trigger and fire across the Garden.

“Take that Moodling!” you shout as bubbles stream from the bubble gun.

You tap your foot and look around. Any minute now…

Hmmmm. You like to be optimistic, but you’re starting to think the Moodling has moved on. Hang on a minute, what’s that you see hurtling across the Torrens Parade Ground?

Moon rocks! A colossal whirlwind of blue arms and legs leaps the brick wall into the Garden.

“Bubbles, Shorty!” says the taller of the Narl.

The Narl, like rubbery blue skyscrapers, proceed to run in circles, catching bubbles in their cavernous mouths like a couple of enormous dogs, and neither of them seem to notice you at all, until…

All the bubbles burst and flocks of birds launch from the trees as the two Moodlings blast from the shiny green cannons in front of the white-walled Torrens Training Depot building. They sail west over King William Street, and you spot the giant splash of one Moodling bombing into the River Torrens, and the other plunging into the middle of Adelaide Oval.

When two fanged shadows hover over you, you remember you have company.

“Mmmm, Captain for dinner tonight…” says Boss as he moves to grab you.

When you see Shorty rubbing his tummy in agreeance, you instinctively blast another round of bubbles across the Garden, drop the weapon and run as fast as your clawed feet will carry you…

Captain Jolly’s Paddle Boats: Run west along the River Torrens to Captain Jolley’s Paddleboats in Elder Park. You need to find the Moodlings quickly to avoid the Narl, and a Captain is honour-bound to help a fellow Captain.

Sir Donald Bradman Statue: Run north along King William Street to the Sir Donald Bradman statue near the Adelaide Oval to try and capture the Moodling that landed there. You can put some distance between you and the Narl, and play to the Moodlings sense of fun and games at the epicentre of South Australian sport.